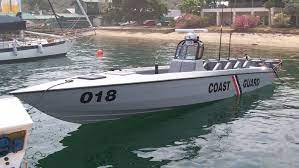 Disciplinary action has been taken against four personnel of the Trinidad and Tobago Coast Guard, among them, a petty officer, an ordinary seaman, an able seaman and a mechanic.

This was done after the TTCG found what it described as gross negligence which led to the sinking of a 28-ft Coast Guard pirogue to at the San Fernando Yacht Club on February 6th this year. On the same day the vessel was recovered and brought unto land and remedial action was taken.

Minister of National Security, Fitzgerald Hinds, made this development known to the Senate Tuesday afternoon.

Minister Hinds said the Coast Guard pirogue was under maintenance at the time and several factors may have contributed to this development.

Minister Hinds said in accordance with regulations of the Coast Guard the officers were disciplined and were found guilty of negligent performance of their duty and subjected to forfeiture of funds due to them in varying amounts.

Body found in back seat of burnt vehicle 0