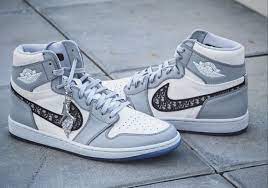 The special edition shoe which combines the luxury designer fashion house with the classic Nike silhouette was highly sought after during its first drop, with sneakerheads needing to rely on raffles and resales to secure a pair.

Now, according to online rumours, the Dior Air 1 Jordan collaboration is set to return, this time in new colourways called Chicago, Royal, and Black.

“From some more whispers out there, same thing, except no white and black, just an all-white pair. One of these 3 is women’s sizes only. Hopefully, we hear more soon.”

The original Dior Air Jordan 1’s can currently be found on reseller sites, starting from £4,934 on StockX or £6,300 on Laced.

Due out in June, the shoe marks Skepta’s first-ever football boot collaboration.

Keep on top of other new drops with our monthly feature Top Tier Trainers. May saw several new drops including the Nike Dunk High, New Balance 550, a Lego x Adidas collaboration, and more.