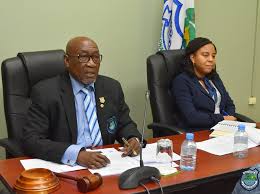 Diego Martin “overqualified” to be a borough”

Chairman of the Diego Martin Regional Corporation (DMRC) Sigler Jack said Diego Martin is more than qualified to be a borough.
In fact, he said they are “overqualified.”

At the opening of the Diego Martin South Community Centre on November 19, the Prime Minister announced the elevation of Diego Martin and Siparia from regional to borough statuses come 2021.

An elated Jack described Diego Martin as the fastest-growing region in TT, with over 150,000 people living within its boundaries and all of TT’s resources within its space.

He cited the new Carenage Health Centre and the University of TT’s campus in Chaguaramas as respective examples of modern health and education facilities in Diego Martin.

He said they have agriculture from Paramin all the way to Chaguaramas and have the main bases of the TT Defence Force at Teteron and the Coast Guard at Staubles Bay.

Jack said Diego Martin also has a major fishing industry and this was boosted by the opening of the Carenage Fishing Centre.

When you put all these components together, he said “it is clear to see why Diego Martin should be a borough.”