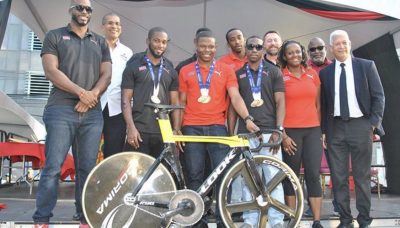 It was a clas­sic case of a coun­try boy de­fy­ing the odds to be world ac­claim.

Min­is­ter of Sport and Youth Af­fairs Sham­fa Cud­joe said the gov­ern­ment, in line with its re­ward and in­cen­tive pro­gramme, will en­sure that suc­cess­ful cy­clists from the Pan Am will re­ceive their cash in­cen­tives at a lat­er date.

Apart from Paul’s world record per­for­mance, which even­tu­al­ly led to the gold medal in the match sprint event in a new Pan Am record, the sprint team al­so claimed gold in the open­ing event, fin­ished just out­side the world record.

Bram­ble al­so pro­duced a break-through per­for­mance in the keirin event which saw just miss­ing out on a medal.

Ac­cord­ing to Cud­joe, the ath­letes are a re­minder to all of us, that we must do our bit to make T&T proud. She sin­gled Paul for his com­mit­ment and ded­i­ca­tion at such a young age, to break a world record and make the coun­try proud.

‘Operation strike back II’ the hunt is on! 0