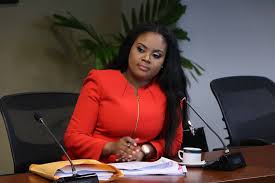 It seems the Prime Minister’s daughter and the AG’s son weren’t the only ones getting their travel exemptions granted.
A few Ministers were also flying in an out of TT.

In an interview with the Express, Sports Minister Shamfa Cudjoe confirmed that she and her sister were granted an exemption to leave Trinidad in December and return in January.

She told the media house: “My sister and I travelled for personal reasons related to a family member’s health. We made the necessary requests and we were granted all necessary approvals.”

Added to this piece of information, was her revelation that Opposition MP Dr Rai Ragbir was also given a pass to depart and return.

Cudjoe said “I travelled to the US on the same day, on the same flight as MP for Cumuto/Manzanilla Rai Ragbir. I don’t hear anyone raising concerns about him. Like I said, we made the necessary requests and got the necessary approvals. Note that I was not excited to travel to the US where the Covid-19 situation is so bad and spend my holidays at the hospital. There is nothing fun and exiting about that.”

Cudjoe and her sister Iyesan Netfa Cudjoe received the exemption to depart Trinidad on December 16, 2020 on board a Caribbean Airlines flight and return on January 11, 2020.