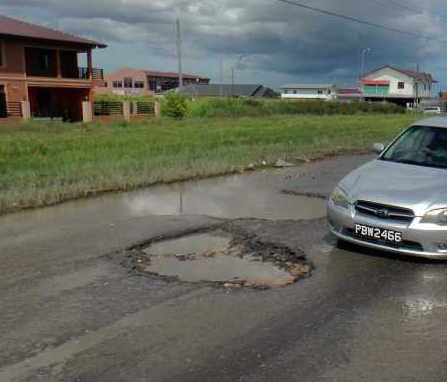 If you have incurred damages to your vehicle due to hitting a pothole or two on the nation’s roadways, Couva South MP Rudy Indarsingh is now encouraging you to take legal action against the Ministry of Works for damages caused.

Indarsingh was speaking earlier on Saturday, while visiting what is being dubbed the “Mother of All Potholes”, at Camden Road, Couva. The problem has existed for at least two months and is only getting worse.

He was on the scene along with the councillors from the Couva/Tabaquite/Talparo Regional Corporation (CTTRC).

Indarsingh told media, “In addition to the state of the roadway, we have been getting complaints about burst tyres, bent rims, damaged front ends, axles. The wear and tear is real. I am encouraging constituents and the public at large to send me copies of their bills in terms of their expenditure, in terms of the conditions of these poor roads, and I will explore with lawyers the possibility of initiating a class action suit against the government.”

“People cannot continue to pay taxes at the pump for the benefit of fixing their roads and be treated like this,” he added.

Indarsingh also called out the Minister of Finance, Colm Imbert. He asked what the finance ministry is doing with the monies collected at the pump. “We continue to hear about the government spending $5 billion on COVID relief, and what is happening to our road infrastructure?”

MP Indarsingh believes the monies are being spent on everything else but road repairs.

Loading...
Newer Post
Panic buying in Vietnam as gov’t to impose ban on people leaving their homes
Older Post
Cardi B to drop new clothing and footwear collection with Reebok on August 27

‘Operation strike back II’ the hunt is on! 0