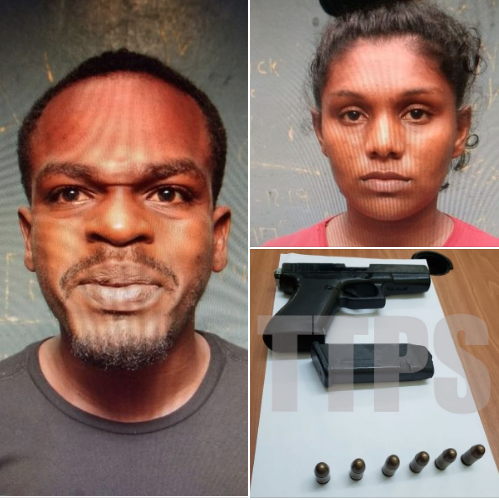 A 27-year-old man and a 23-year-old woman, both of Sunrees Road, Penal, were arrested on Wednesday 11th November, 2020, for possession of a firearm and ammunition.

Akeem Kinsale and Nicole Cedeno were formally charged for the offence on Friday 13th November, 2020. They are scheduled to appear at the Siparia Magistrates’ Court today.

Officers of the Penal Criminal Investigations Department (CID) and South Western Division Task Force (SWDTF) executed a search warrant at a residence in Penal and proceeded to a bedroom with two chest of drawers.

A canine dog at the scene alerted officers to one of the chest of drawers. A physical search was conducted and a Glock pistol with a magazine containing six rounds of ammunition was allegedly found in the third drawer of the unit. The couple was arrested by PC Heralal.
The exercise also included Sgt Haynes, Cpl Thompson, and Ag Supt Gunness.