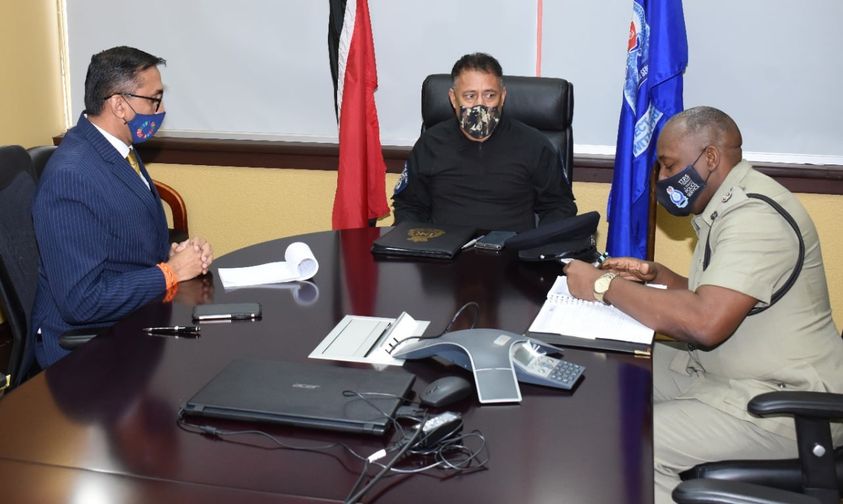 Commissioner of Police, Gary Griffith, has committed the support of the Trinidad and Tobago Police Service to the Couva North constituency, to ensure the success of their newly formed neighbourhood watch groups and Police Youth Clubs (PYCs).

The CoP was pleased to hear about the initiatives being undertaken in the constituency, which were brought to his attention by Member of Parliament, Ravi Ratiram.
The two held a meeting today at the Police Administration Building, Port of Spain. The meeting was also attended by Snr. Supt. (Ag.) ‘Central Division’ Curtis Simon.

MP Ratiram indicated to the CoP that the Couva business sector is willing to have a meeting with him, so they can further discuss their collaboration with the TTPS to keep their communities crime-free.

Commissioner Griffith noted that the TTPS has been doing much work in the constituency to deal with issues of traffic congestion, noise pollution, illegal immigration and prostitution. He said more can be done with the assistance of the MP who can help identify issues and bring them to his attention so they can be addressed.

MP Ratiram said the establishment of neighbourhood watch groups and the PYCs are also helping to ensure that crime does not infiltrate the communities and keep the youth away from criminal activities.

Snr. Supt. (Ag.) Simon urged MP Ratiram to make an extra effort to target the most vulnerable youths in the district to join the PYCs, especially youths who come from single-parent homes or homes where a parent or sibling has been incarcerated.
CoP Griffith meanwhile advised the MP to ensure there is a strong synergy between the watch groups and the TTPS, so the officers can respond to incidents of crime quickly and efficiently.

The CoP and MP Ratiram agreed to have further in-depth discussions on other initiatives which the two parties can partner on, such as the use of private cameras to keep the constituency under constant surveillance.