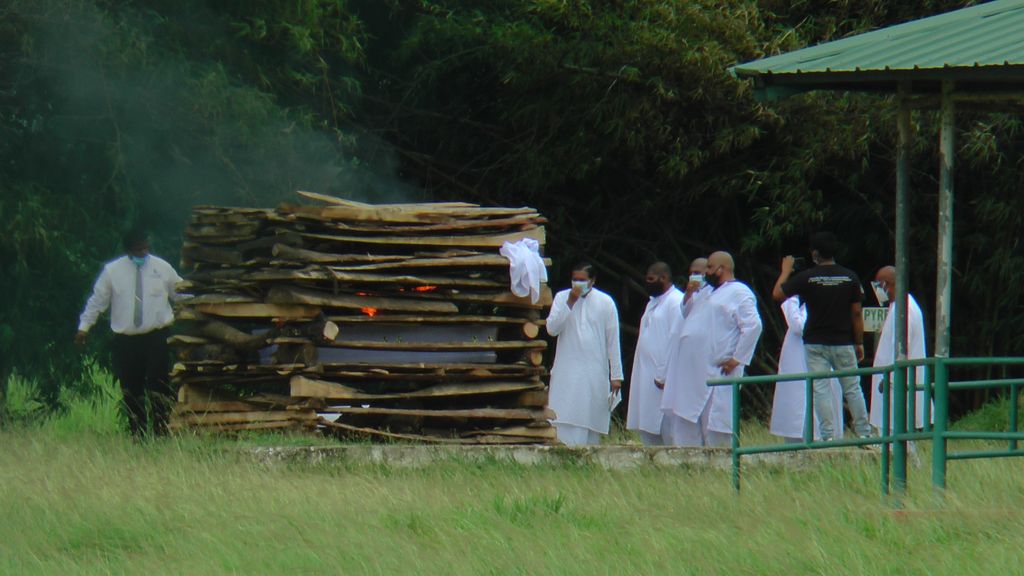 CMO to meet with Maha Sabha on open-pyre ban

The Chief Medical Officer is set to meet with the Sanatan Dharma Maha Sabha to discuss the ban on open-pyre cremations for COVID-19 victims.

In a release, the SDMS said “It has always been mindful of the predicament our nation faces with regards to the Covid19 pandemic and the need for all citizens to adhere to the proper health protocols. However, the SDMS believes Hindus in Trinidad and Tobago are entitled to an explanation as to the government’s decision to prohibit open pyre cremations in favour of indoor crematoriums.”

They said “This issue is a cardinal one, given the religious significance of cremations, and given the fact that a rising death rate is one tragic outcome of the Covid19 pandemic. While indoor cremations are acceptable within the Hindu religion, and have been the chosen method of disposal for some persons in the past, it has now become mandatory for all victims of Covid-19 who must be cremated according to Hindu rites. The issue revolves, not around the use of a crematorium per se, but the mounting cost of storage of dead bodies for days on end, as well as the cost of the incineration itself. Families grieving for their loved ones would not have been so financially burdened if they were allowed to have open pyres instead.”

According to the release, “When Mr. Dinesh Rambally (Member of Parliament and Legal Advisor to the SDMS/ Attorney at Law) wrote to the Chief Medical Officer (CMO) on the 12th and 16th days of July 2021, he did so from a position of empathy, having learned that many lower-income Hindu families could hardly afford indoor crematorium services for one family member, far less two and three. Recognizing that the Hindu community has been extremely compliant with all health protocols, it was important to revisit the relevance of this policy, given that much more is now known about the virus today. The SDMS therefore requested from the CMO and Minister of Health, the basis on which such a policy was rationalized.”

It added, “Regrettably, the SDMS never received a response to that letter. It was therefore forced to conclude that either the CMO felt it not worth his time to provide Hindus with a rational explanation of such a policy, or could not care to address the grave financial hardship that flowed from this policy.”

“Subsequently, the SDMS instructed its legal representatives at Sovereign Chambers to once again write to the CMO asking that some pertinent questions relating to this policy be addressed, and, at the same time, to inform him of its intention to institute legal proceedings on behalf of the Hindu community should he not treat with these concerns and/or reconsider his policy of an absolute prohibition on open pyre cremations for victims of Covid19.”

The SDMS said, “Now there might be room for cautious optimism since the CMO has extended an invitation to meet with the SDMS, and it is hoped that this may engender fruitful discussions on the crematorium issue thereby bringing relief to the very many Hindu families who are unable to cope with such a policy at such a sensitive time in our nation’s history
Through constructive dialogue it is hoped that we can maintain the constitutional right to practice important religious customs in ways that are compliant with Covid-19 protocols.”

“As demonstrated by its current legal proceedings concerning the reduction in the number of CAPE scholarships and its legal challenge to the archaic Sedition Act, the Sanatan Dharma Maha Sabha will continue to stand up for the constitutional rights of its members as well as for all citizens of Trinidad and Tobago. The SDMS trusts and expects this issue can be resolved without the need for legal recourse which can take months and even years to determine,” as stated by the release.

Unvaccinated Bajans Asked to Protect Themselves 0