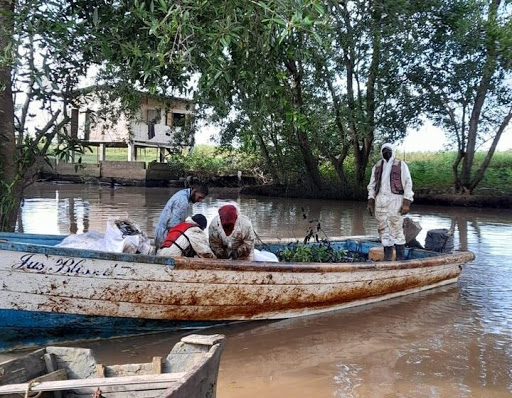 Ninety (90) per cent of the oil that spilled into the South-Oropouche river has been cleaned up.

The spill, which occurred on Wednesday 18 November, had affected a 3.7-kilometre area along the riverbank.

However, during their clean-up operations this morning, it was reported that no free oil was observed on the surface of the water and the mangrove appeared healthy.

Shyam Dyal, Health, Safety and Environment Manager, said “When we look at the river ecosystem, what we are seeing is no free oil on the surface of the river. We are seeing wildlife. We are seeing healthy mangrove throughout.”

Dyal pointed out that there are some barks on the mangrove that may have some oil stains and said “the reason for that is that we have taken a policy decision not to use any chemicals, absolutely no chemicals.”

He added that “The international practice is when you have an incident in a mangrove or river ecosystem, you allow natural attenuation to take place. Natural attenuation means that you allow nature to clean itself.”
“Neither was soil removed nor was the mangrove cut during the clean-up,” he explained. “Only leaves with oil were carefully plucked and taken away in crocus bags.”

The Heritage HSE manager also pointed out that the majority of fisherfolk were hired to assist with the clean-up exercise, along with about 12 of their boats.

Red House restoration on the way 0