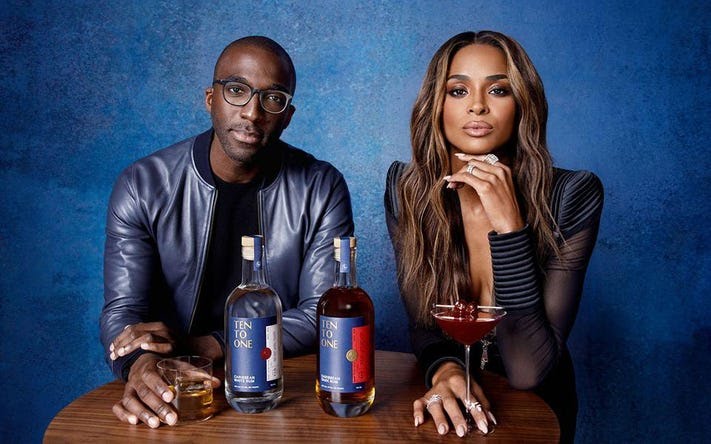 Ciara partners with Trini entrepreneur on Ten to One Rum

Ciara wants to change how you think about rum and has joined forces with Trinidad-born founder and CEO Marc Farrell as an investor, co-owner and director for Ten To One rum.

Rum is not just for sugary frozen daiquiris on Spring Break, or that one time you had a punch after going sailing in the British Virgin Islands. A good rum can be for celebration, both major events and those everyday victories and milestones where you’re taking time to reflect on the moment.

For the singer, songwriter and entrepreneur, that was planning out her first cocktail after breastfeeding her son Win for 10 months.

“I had a classic mojito. It’s one of my go-tos, and it was really good,” she said, laughing. “Imagine, I was breastfeeding for 10 months in quarantine — that was a journey. But it was also really sweet. I enjoy bonding with my baby, but it was definitely time. I was excited, looking forward to celebrating that moment and it was the perfect way to kick it off.”

Spreading the word about how to craft those special cocktails for everyday celebrations is one of the reasons Ciara has joined Trinidad-born founder and CEO Marc Farrell as an investor, co-owner and director for Ten To One rum.

Farrell, who left Trinidad at age 16 to study chemical engineering at MIT and then went on to become the youngest Vice President at Starbucks, founded the brand in 2019, with a focus on elevating the spirit and highlighting it’s versatility, as well as modern Caribbean culture. The name comes from a quote from Dr. Eric Williams, Trinidad and Tobago’s first Prime Minister when discussing the first Caribbean federation of 10 countries, who said “One from ten leaves zero” — the idea that we are stronger together than apart.

Ciara is also no stranger to business ventures. She’s started a production company with her husband Russell Wilson, is involved in fashion lines, and is a co-owner of the Seattle Sounders, among other ventures. In 2019, she attended a short intensive course at Harvard Business School on the Business of Entertainment, Media and Sports, which she said gave her skills to fine tune her decision making as well as learn from past business mistakes.