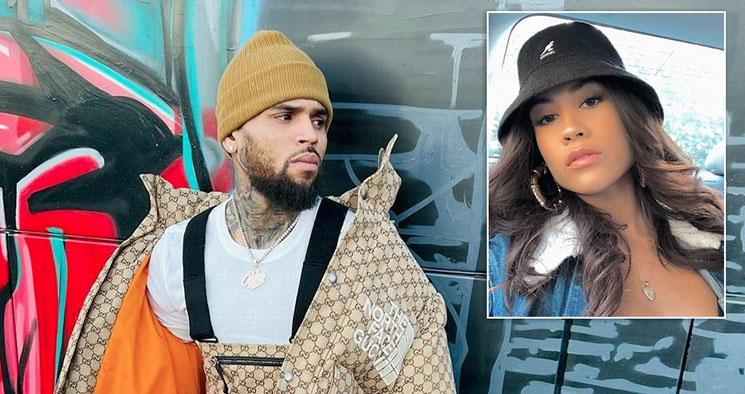 If Chris Brown confirmed he is the father then this would make it the singer’s third child with his third baby mama. The R&B singer, 32, has seven-year-old daughter Royalty Brown with model Nia Guzman and Aeko Brown with Ammika Harris.

Diamond Brown confirmed via Instagram that she gave birth to a baby girl.

“The princess is here! Lovely Symphani Brown,” the model wrote. “My sweet babygirl, it’s been a whole day you’ve been in the world and have already shown me the true meaning of life. I promise to love and protect you always. Forever yours, mommy.”

Fans were keen to address who the father of Brown’s child is as Diamond recently posted a heavily pregnant full body photo, which suggests she might be in her last trimester of her pregnancy based on the size of her belly at the time of the reports in December last year.

Posing in a long skin-fitted maxi dress, Diamond posed as she showed off her curves and round pregnant belly. Reports are that she has also had her baby shower- a teddy bear-themed event four weeks ago.

While there has been no confirmation from the expectant mother or Chris Brown, many of the famous singer’s fans commented under her photos as they congratulated Diamond and Chris Brown for their first child together.

While many appeared happy at the news, some fans seem to think that Chris Brown’s second baby, mama Ammika Harris isn’t too thrilled about the news of a new baby and sibling to her child Aeko Brown.

Some fans have claimed that Harris has blocked people who commented on Diamond’s post.

“Be careful his second babymama [sic] would literally block you just for commenting,” one person warned about Ammika. “She mad and bitter AF,” said another in response to a fan sending her congratulations to Diamond and Chris Brown.

Others, however, had a warning for Diamond, with one person saying, “She won’t be treated any better than he treats Ammika, its his kids he cares about.”

Chris and Harris were first seen together in 2015, but neither confirmed a relationship. In 2019, it was apparent that Brown was head over heels in love with Harris having painted her photo on his tour bus.

They had their son Aeko Catori in 2019. It’s unclear if he and Harris are still together, although she can be found all over his page with their son, including on her birthday this year when he told her, “I love you Meek Meek.”

Fans meanwhile have alleged that Diamond has been around despite Brown appearing to be with Ammika. The singer was reportedly flirting with Diamond while Harris was pregnant.

According to fans, “Chris has been spotted with this model a few times by the paparazzi. He even was seen under her photos flirting and liking pictures the day his second baby mother ‘Ammika Harris’ announced her pregnancy back in 2019.”

Ammika Harris, on the other hand, seemed to be with the singer on a family trip in London with their son. Breezy surprised pal Tory Lanez while on stage two days ago in London.

Man killed while on way to work 0