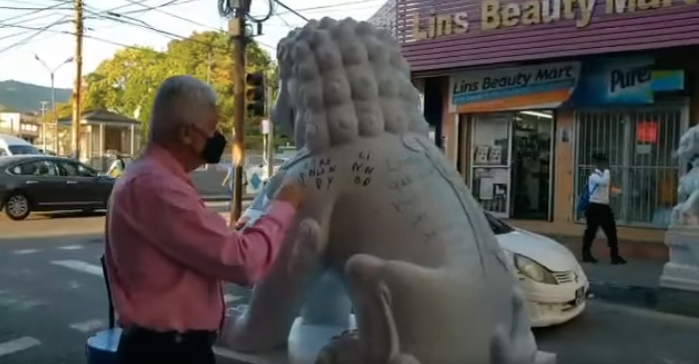 Some miscreant has defaced one of the two Chinese lion statues, situated on the corner of Park and Charlotte Street in Port of Spain.

The statues, which were a donation by the People’s Republic of China, were installed by the Port of Spain City Corporation in February.

The statue’s defiling was discovered on Thursday.

It appears the culprit scribbled a series of vulgarities across the back of one of the monuments using a permanent market.

Mayor Joel Martinez visited the scene yesterday and said he was very disgusted.

He asked’Why would someone see something that looks so rich and significant and important to our city, that you could feel like you have the right to deface it?'”

Mayor Martinez assured that the statue will be repaired in the shortest possible time.

GORTT looking forward to working with Biden and Harris 0