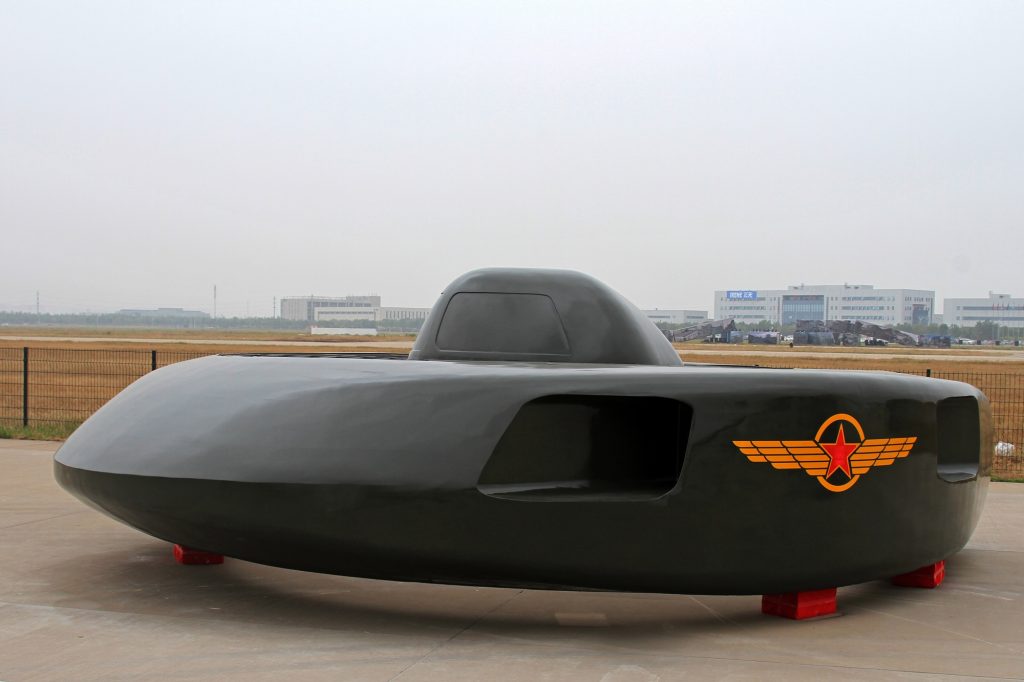 An experimental attack helicopter that looks like a flying saucer has been unveiled in China.

The strange flying machine, dubbed the Great White Shark, is loaded with an arsenal of high-tech weaponry and could take to the skies as early as next year.

Pictures of the UFO-like aircraft with an unusual central cockpit first began to circulate online last week after it featured at an air show near Beijing.

State-run Chinese paper Global Times later confirmed that the contraption was a new type of experimental helicopter known as the Great White Shark.

The craft can be coated with stealth materials and loaded with missiles, making it a potentially lethal weapon on the battlefield.

“Attracted by the futuristic design of the aircraft, Chinese military observers pointed out that the aircraft’s high-speed and stealth capabilities could give the weapon an edge on the battlefield.”

The helicopter was apparently shown off at the China Aviation Helicopter Industry Base in the eastern Chinese district of Binhai.

It was essentially a wide metal ring with a cockpit lodged in its center, stretching more than seven meters long and just under three meters wide.

A propeller was housed within the ring, bolstered by two turbojet engines that can provide forward thrust. The craft’s pokey size would help it avoid detection on the battlefield

Plans suggest the craft would be capable of firing missiles at enemy targets, though exactly where they would launch from is unclear.

Some experts in China reportedly expressed concerns that the craft would not be stable enough to fly. Similar experiments in the US have later been canned.

“Whether or not this particular helicopter can become practical, such explorations are beneficial to China’s technology development for future helicopters,” an anonymous military expert told the Global Times.

For comparison, Britain spends $48 billion a year on its military, while the United States defense budget – the biggest in the world – sits at $696 billion.

Woman suing McDonald’s; says their ad caused her to break her fast 0