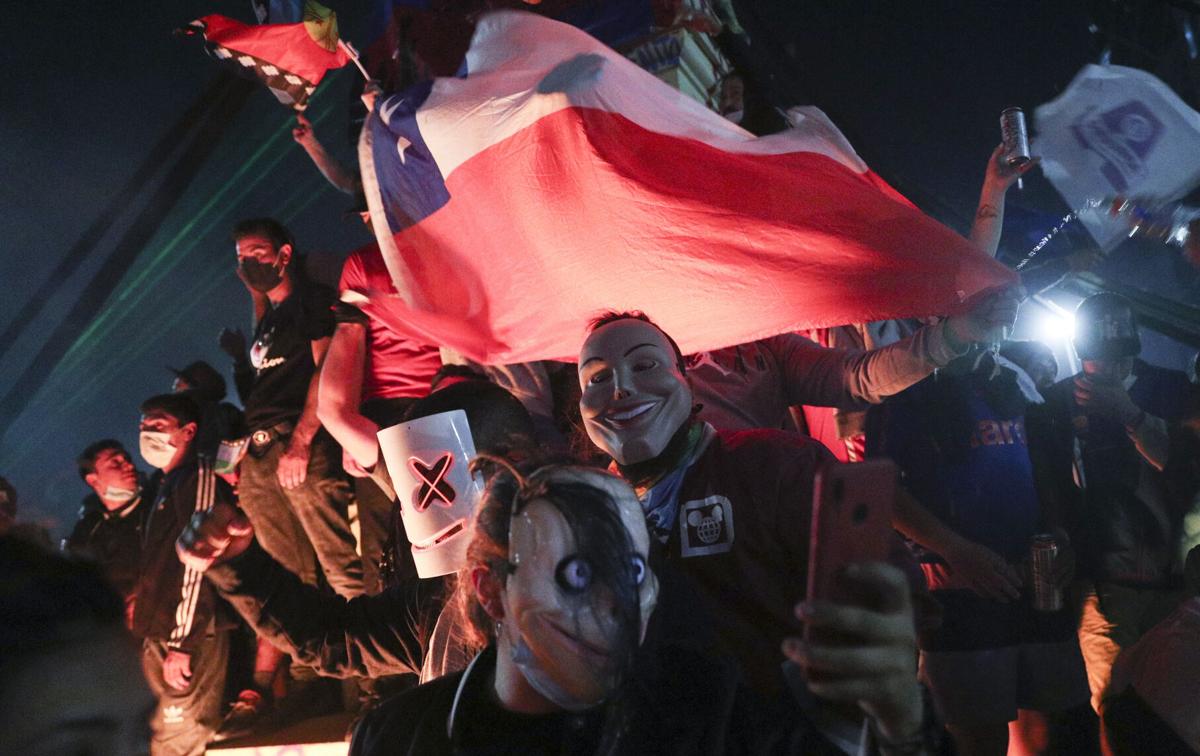 Tens of thousands of Chileans took to Santiago’s main plaza to celebrate after people across the country overwhelmingly supported the rewrite of Chile’s dictatorship-era constitution that many see as the root cause of the social and economic inequalities in the country.

In Santiago’s Plaza Italia, at the center of last year’s massive and often violent protests that sparked demand for a new charter, fireworks rose above huge crowds of jubilant people singing in unison on Sunday night as the word “rebirth” was projected onto a tower above.

With more than three quarters of the votes counted in Sunday’s referendum, 78.12% of voters opted for a new constitution drafted by citizens. Many have expressed the hope that a new text will temper a shameless capitalist ethos with guarantees of more equal rights to health care, pensions and education.

“This triumph belongs to the people, it is thanks to the efforts of all that we are at this time of celebration,” Daniel, 37, told Reuters news agency in Plaza Nunoa in Santiago. “What makes me the happiest is the participation of young people, young people who want to make changes.”

Chilean President Sebastian Pinera said if the country had been divided by protests and debate over whether to approve or reject drafts of a new charter, they should now unite behind a new text that provides “A home for all”.

“So far the constitution has divided us. From today, we must all work together so that the new constitution is the great framework of unity, stability and the future ”, he declared in a speech broadcast from his Moneda palace surrounded by his cabinet.

The center-right leader, whose popularity fell to record levels during the unrest and remained in the doldrums, addressed those who wanted the current constitution recognized for making Chile one of the Latin American economic success stories.

Any new project must incorporate “the legacy of past generations, the will of present generations and the hopes of generations to come,” he said.

The vote came a year to the day after more than a million people gathered in downtown Santiago amid a wave of social unrest that left 30 dead and thousands injured.

The scale of the October 25 march demonstrated the scale of social discontent and was a tipping point in protesters’ demands for a referendum. Within weeks, Pinera had agreed to launch a process of drafting a new constitution, starting with a referendum to decide the fate of the current text.

Chile’s current constitution was drafted by the dictatorship of General Augusto Pinochet and sent to voters at a time when political parties had been banned and the country was under heavy censorship.

It was approved by a 66-30% margin in a 1980 plebiscite, but critics said many voters were intimidated by a regime that arrested, tortured and killed thousands of suspected leftist opponents. after the overthrow of an elected socialist government.

The free market principles embodied in this document led to a booming economy that continued after the return to democracy in 1990, but not all Chileans shared. A minority were able to take advantage of good privatized services in education, health and social security, while others were forced to resort to sometimes scarce public alternatives. Public pensions for the poorest are just over $ 200 per month, or about half the minimum wage.

MoH and MoE to discuss possible reopening of schools 0