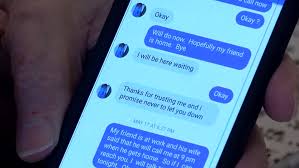 A Chicago woman whose identity was stolen on Facebook, is sharing her experience so others can avoid making the same mistake.

Vera Waters told CBS 2 that she was scammed when she received a direct message from her cousin’s page in July.

The message was about a government grant, and Waters wanted to use the money to pay off her debt.

“To get the thousands of dollars she was promised, she sent over her personal information. She was instructed to make a video in front of a mirror while holding her driver’s license, which she did.”

“I thank the government for approving me of this grant. It’s real money, and you don’t have to pay it back, and everyone can apply,” she said in the video. “Thank you.”

Soon after realizing she had been scammed, she found herself locked out of her Facebook account. The scammers were using the video she recorded to try and scam everyone on her Friends list to make matters worse.

Waters reported the incident to the social media platform.