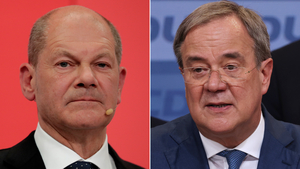 Angela Merkel’s anointed successor has refused to give up, but projected election results look increasingly bleak for German conservatives after a nail-biting race with the centre-left.
Armin Laschet is vowing to form a government, despite presiding over the CDU’s worst performance in history.
The results are not yet final and the margin is small, but the centre-left SPD could be closing in on victory.
SPD leader Olaf Scholz said his party had a clear mandate to rule.
Exit polls predicted a dead heat, but this election has been unpredictable from start to finish and the result was never going to be the end of the story. For one thing, the outgoing chancellor is going nowhere until a coalition is formed – and this may have to wait until Christmas.