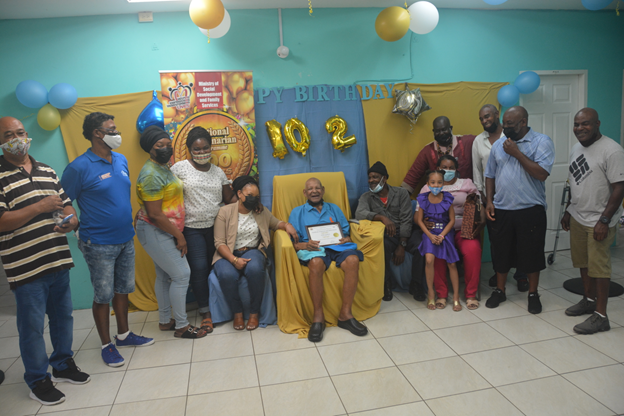 Visiting the centenarian to celebrate the continued milestone on the Spiritual Baptist/Shouter Liberation Day holiday was the Minister of Social Development and Family Services, Donna Cox.

Minister Cox was joined by Permanent Secretary Sheila Seecharan and the staff of the Ministry’s Division of Ageing and Corporate Communications and Education Unit.

According to the Minister, the Ministry of Social Development and Family Services was proud to venture to the rural and scenic area of Toco to wish Mr Gomez a very happy birthday noting the Ministry re-launched the National Centenarian Programme to ensure all centenarians received recognition for the achievement.

Minister Cox also commended relatives for their attendance noting that though Covid-19 still poses a threat to older persons who have a higher risk of being adversely affected, social connections are very important to the elderly, especially those living in homes for older persons.

She further commended the Toco Senior Citizens Home where Mr Gomez has been a resident for over ten years for their care and hospitality stating that it may have contributed to his longevity.

Minister Cox then presented Mr Gomez with his Certificate of Achievement and Honour, a hamper, and a personalised birthday cake.

22 dead after huge explosion in Havana 0