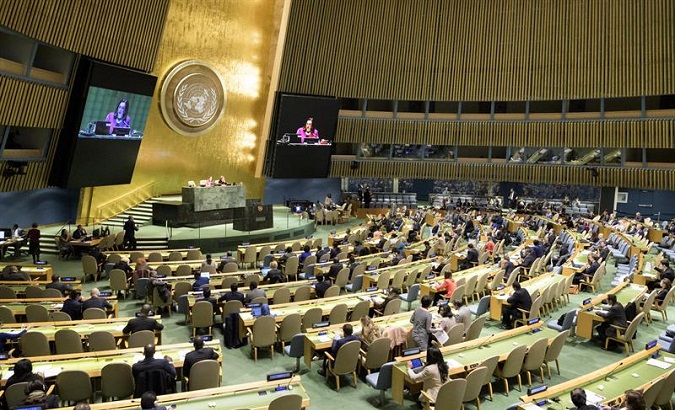 CARICOM Nations Reaffirms Stand Against US Blockade of Cuba

Representatives of Caribbean countries took the stage at the United Nations to slam the decades-long blockade against Cuba and voice support for the U.N. resolution calling for lifting the harsh blockade imposed by Washington.

The representative of Antigua and Barbuda said the blockade continues to produce catastrophic consequences against the Cuban people. “This policy affects my nation because it avoids building better economic ties with that country. Antigua and Barbuda believes that Cuba is a legitimate member of the Western community and we ask the United States to interrupt that policy and that it is useless. ”

Later he said that good governance gives legitimacy to the Cuban government, and therefore, no force should try to pressure another to impose another government. “Dialogue is the key to ending differences.”

The representative of Trinidad and Tobago began his speech by stating that in 2015 the UNGA committed to a new collective vision for the people of the world, through the adoption of the 2030 Agenda and its Sustainable Development Goals (SDGs).

“This showed that the U.N. was evolving as a dynamic organ capable of reacting to the challenges of people in the world.”

Despite this universal commitment, the Trinidad and Tobago official noted that the blockade imposed against Cuba continues to make it difficult for this nation to fullfill its full potential to fulfill all the SDGs.

“The opposition to this anachronistic policy is universal in nature,” he said, and recalled that since 1992 the UNGA has approved the draft resolution presented by Cuba.

It emphasizes multilateral approaches, not unilateral ones. “In accordance with these commitments, we reiterate our relentless call for an end to the economic, commercial and financial blockade imposed by the US. on Cuba”.

In this context, we will again support the draft resolution on the need to end this blockade, the diplomat concluded.

The draft resolution presented Thursday has to do with the right to sovereignty, non-interference and the principles of the United Nations, the representative of Saint Kitts and Nevis said at the beginning of his speech.

“Saint Kitts and Nevis has good relations with the United States.” However, it is here because the blockade generates “an important suffering” to the people of Cuba

The diplomat from San Cristobal said that Cuba is an ally of Saint Kitts and Nevis. He recognized how the largest of the Antilles has contributed to the agricultural, educational and health development of his country.

The blockade is a burden on the Cuban brothers and sisters. It is an unfair burden for that brother town, he said.