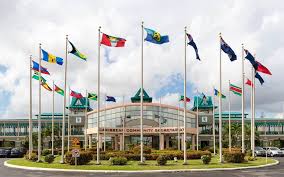 Caribbean Community leaders are expected to speak with one voice “loud and clear” on the deadly implications of the climate crisis for the region when they begin to appear at the United Nations from Tuesday, CARICOM Ambassador David Comissiong has revealed.

Presidents and prime ministers are gathering this week for the UN General Assembly’s 74th session, fresh with images of the devastating impact of Category Five Hurricane Dorian on the Bahamas and the increasing ferocity of tropical cyclones affecting the region, said the envoy.

He said: “When the new United Nations General Assembly Session begins in New York this month, you are going to hear the voice of the Caribbean Community very loud and clear on this issue climate change.

“We know that the increasing ferocity of these hurricanes that are impacting on the Caribbean is a direct consequence of global warming and climate change.

“This is an issue that is being taken very seriously by the CARICOM leadership.”

The Ambassador said “We are living in a world in which a major country like the United States of America, which is the world’s number one economy that no doubt has contributed to global warming and punching holes in the ozone layer… would pull out of the Paris Agreement and that is very disturbing,”

“This is a very unsatisfactory state of affairs. We are very conscious in the Caribbean that we do not have industrial economies so we have not contributed in any significant way to global warming, yet we are the ones facing the direst consequences in the form of monster hurricanes and rising sea levels that are affecting our island states.”

When questioned about the ability of small states to force meaningful change in the global fight against climate change, he argued the region was not helpless but would continue to face an uphill battle.

Ambassador Comissiong said “Small states have power as well. Small states can speak truth to power and can stand on principle and demonstrate moral courage. We have to believe in our cause, which is a just cause, a righteous cause.”

“It is a cause that goes to the core of whether humanity will survive on this earth in the decades and centuries to come. So we must believe in that cause and must advocate it with commitment, passion and commitment regardless of our size.”

Chief Justice reveals how the pandemic has benefitted the courts 0

Passenger capacity of taxis/maxi-taxis increased to 75% 0