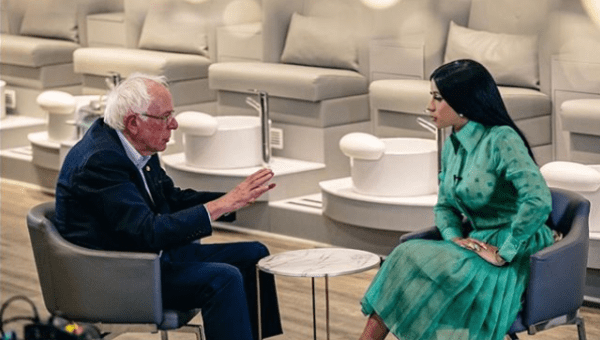 In a video shared by the rapper Tuesday, the two could be seen talking about important issues that are part of working-class lives of America.

“A couple of weeks ago I asked my followers if you all had the chance to ask a Democratic candidate a question, what would that question be?” she wrote in a video caption. “The topic that was mentioned the most by all of you was about raising MINIMUM WAGE.”

Cardi B asked Sanders, “What are we gonna do about wages in America? Like, for example, me, as a New Yorker, not now, but you know, when I was not famous, I just felt like no matter how many jobs I got, I wasn’t able to make ends meet. Like, I wasn’t able to pay my rent, get transportation and eat.”

Sanders acknowledged the wage disparity and said millions of people are living on “starvation wage.”

Hence for Sanders, unions are important in negotiating fair wages. He said workers should be able to join unions easily so that they can collectively bargain for a decent wage. Sanders also talked about his legislation which would increase the minimum wage to US$15 per hour.

Cardi B is a vocal supporter of Sanders and she encouraged her fans to send more questions for future discussions.