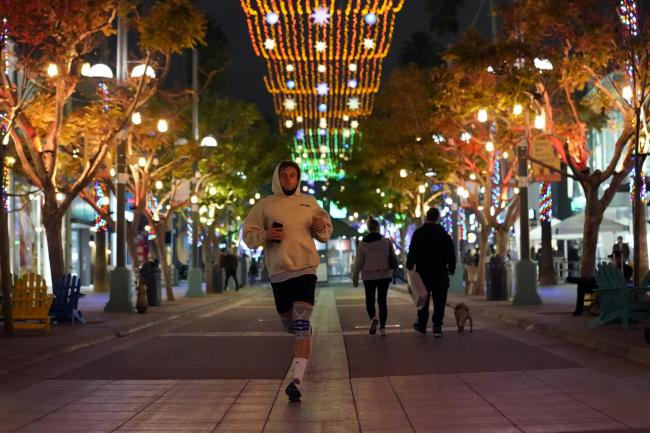 California began a night-time curfew on Saturday, in an attempt to curb a surge in coronavirus cases.
The western state’s latest figures are now worse than the previous peak in August, the Los Angeles Times reports.

Across the US, the daily death toll linked to Covid-19 has passed 2,000 for the first time since May.
The country has now more than 12 million confirmed infections, with more than 255,000 deaths, according to data compiled by Johns Hopkins University.
This is by far the highest death toll in the world.

About 187,000 new infections were recorded nationwide in the latest figures – released on Friday for the previous day – which is an all-time high.

Several states have imposed new mask mandates and restrictions to try to combat the rise, and in Texas the National Guard is being deployed to the city of El Paso to help with morgue operations there.

The Centers for Disease Control and Prevention (CDC) has also urged Americans to avoid travelling for the Thanksgiving holiday on 26 November to prevent increased transmissions.

Thanksgiving typically heralds the busiest week for travel in the US. Last year, an estimated 26 million people passed through the country’s airports in the week surrounding the holiday.

On Friday, it was revealed that President Donald Trump’s oldest son, Donald Trump Jr, had tested positive for coronavirus. “Apparently I got the ‘rona,” he said in a video on social media, adding that he was asymptomatic so far and quarantining.

California reported a total of one million cases last week, making it the second state to do so after Texas.

The new daily curfew, from 22:00 local time on Saturday (06:00 GMT Sunday) until 05:00, will carry on until 21 December, with a possible extension if needed, according to authorities.
Restaurants will be able to offer takeout and delivery outside these hours.

The stay-at-home order affects 41 out of California’s 58 counties, covering more than 94% of the state’s population. Some 40m people live in California, the most populous state in the US.
Some counties have also warned that a more severe lockdown could follow. The latest measures are not as strict as restrictions imposed between March and May, when all nonessential business and travel was prohibited.

Other places, including New York City, are also operating a night-time curfew. Bars, restaurants and gyms are allowed to open until 22:00, but schools have been closed.

The Californian curfew was announced by Governor Gavin Newsom.
“The virus is spreading at a pace we haven’t seen since the start of this pandemic, and the next several days and weeks will be critical to stop the surge,” he wrote in a statement.
Hospital admissions are up 61% statewide in the last two weeks, according to the Los Angeles Times newspaper.