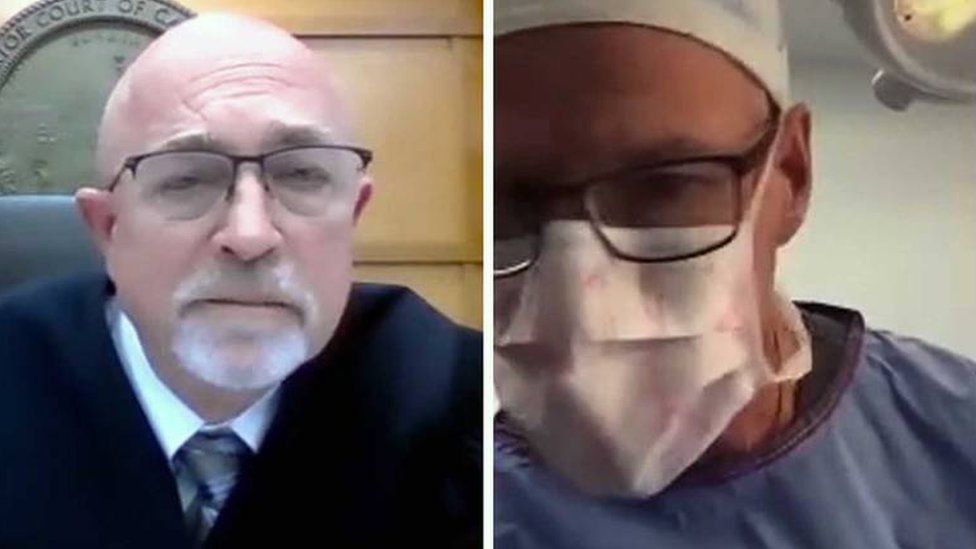 A doctor in Sacramento, California joined a traffic court hearing on Zoom while performing surgery on a patient.

Scott Green was dressed in surgical scrubs in an operating theatre when he appeared at his virtual trial on Thursday, the Sacramento Bee reported.

When questioned by the judge, Mr Green said he was happy to go ahead, and that he had “another surgeon right here who’s doing the surgery with me”.

The judge said that would not be “appropriate” and postponed the trial.

The Medical Board of California has now said in a statement that it would look into the incident, adding that it “expects physicians to follow the standard of care when treating their patients”.

Before the Sacramento Superior Court hearing, which was livestreamed on YouTube, a court clerk asked the plastic surgeon: “Hello, Mr Green? Hi. Are you available for trial? It kind of looks like you’re in an operating room.”

The clerk told Mr Green that the hearing was being livestreamed online, because traffic hearings are required by law to be open to the public. At the same time, an officer summoned to appear in court raised her eyebrows.

While waiting for the judge, Court Commissioner Gary Link, to enter the Zoom, Mr Green appeared to continue operating on the patient.

Once Mr Link had joined, he told the hearing: “So unless I’m mistaken, I’m seeing a defendant that’s in the middle of an operating room appearing to be actively engaged in providing services to a patient. Is that correct, Mr Green? Or should I say Dr Green?”

After the surgeon confirmed he was in the middle of performing surgery, and that he would be happy to continue, Mr Link said: “I do not feel comfortable for the welfare of a patient if you’re in the process of operating that I would put on a trial, notwithstanding the fact the officer is here today.”

Mr Green then insisted he was able to go ahead, adding: “I have another surgeon right here who’s doing the surgery with me, so I can stand here and allow them to do the surgery also.”

Mr Link replied: “I don’t think so, I don’t think that’s appropriate. I’m going to come up with a different date – when you’re not actively involved or participating and attending to the needs of a patient.”

The surgeon reportedly told NBC News: “That’s not accurate and I have nothing to say. Thank you.”

This isn’t the first Zoom court mishap to go viral.

Earlier this month, a lawyer was unable to remove a cat filter from his screen, before telling the judge he was happy to go ahead anyway: “I’m here live, I’m not a cat.”