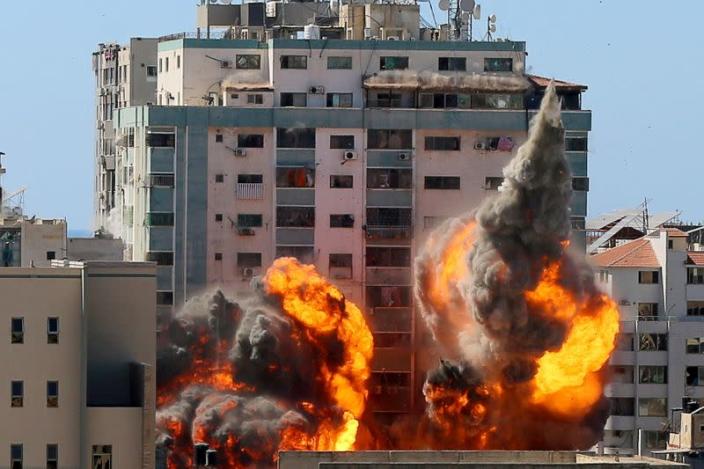 A Gaza City 12-story building housing the local offices of the Associated Press and Al Jazeera was destroyed in a missile attack on Saturday, during ongoing Israel-Hamas battles.

The al-Jalaa building was also used by the Islamist militant group Hamas, according to Israel. The building’s offices and apartments were evacuated after the owner received advanced warning of the strike and no journalists were reported killed.

Reports indicate a Palestinian journalist was wounded, and the debris scattered yards away as the building collapsed.

The Israeli military said the attack by its fighter jets was done because the building “contained military assets belonging to the intelligence offices of the Hamas terror organization.”

AP President and CEO Gary Pruitt called the strike “an incredibly disturbing development”. A dozen AP journalists and freelancers were evacuated in time.

“We are shocked and horrified that the Israeli military would target and destroy the building housing AP’s bureau and other news organizations in Gaza,” Pruitt said in a statement.”The world will know less about what is happening in Gaza because of what happened today.”

The US government claimed it had told Israel to protect any journalists before the incident.

“We have communicated directly to the Israelis that ensuring the safety and security of journalists and independent media is a paramount responsibility,” White House Press Secretary Jen Psaki tweeted.

“The aim of this heinous crime is to silence the media and to hide the untold carnage and suffering of the people of Gaza,” he said in a statement.

Israeli military spokesman Lieutenant Colonel Jonathan Conricus said any attempts to paint the strike as a way to silence the media were off-base “That is totally false, the media is not the target,” he told Reuters.

Conricus said Hamas might have been using the media as a hoped-for shield. “They probably hoped that would keep them safe from Israeli attack”.

The Israeli military has said that its strikes on buildings in Gaza are aimed at hitting targets used by Hamas. Reports indicate at least 140 people have been killed in Gaza, while Israel has reported 10 people dead.

Loading...
Newer Post
SOE too late in coming, says head of Penal/Debe Chamber
Older Post
Dean at UWI Law breaks down what a SOE & Curfew is