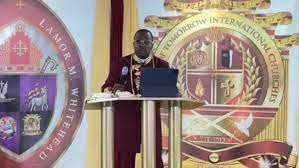 A Brooklyn bishop was robbed at gunpoint on Sunday while giving a sermon, and it was all caught on video.

Around five to 10 minutes into the livestream video, Bishop Lamor Whitehead was interrupted when three to four men walked in with guns. The bishop believes he was targeted.

“I said, ‘Alright, alright, alright,’ pretty much stating that I’m not going to do anything because I know you’re coming for me. You’re coming straight to me. I don’t want my parishioners hurt. I’ve got women and children there,” said Whitehead, of Leaders of Tomorrow International Ministries.

Marlene to be interviewed by Professional Standards Bureau 0

No strike action, shortage of gas due to inability to purchase fuel 0