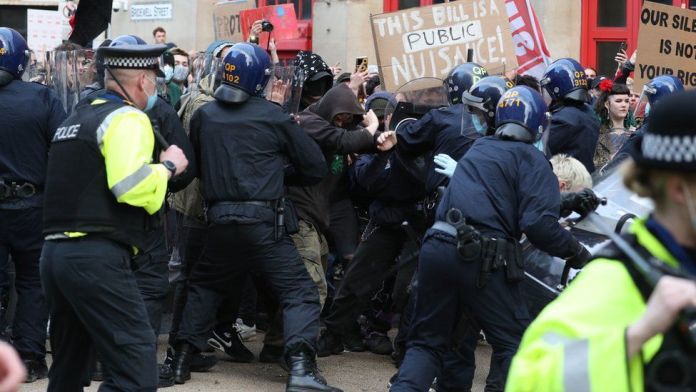 Twenty police officers have been injured after violence erupted during a ‘Kill The Bill’ protest in Bristol.

On March 21st, thousands of demonstrators took to the city to protest against the government’s Police, Crime, Sentencing and Courts Bill that would increase police powers to deal with non-violent demonstrations.

Police said the ‘Kill The Bill’ march began peacefully but took a violent turn when a “small minority” attacked the police station in Bridewell Street.

Twenty police officers were injured in the clash, with two being taken to hospital with broken bones and ribs.

“Thuggery and disorder by a minority will never be tolerated,” she tweeted. “Our police officers put themselves in harms way to protect us all. My thoughts this evening are with those police officers injured.”

Speaking to Sky News, Andy Marsh of Avon and Somerset police said: “It really was a disgraceful scene committed by criminals. I don’t believe this was a protest.

“It wasn’t people frustrated with the lack of ability to protest – this was people intent on causing serious disorder, violence and damage, people with a grudge against policing.

“The people involved in assaulting the officers, burning out vehicles, damaging vehicles, smashing windows, hurling projectiles from the multi-storey car park, throwing things at our horses and dogs – they were people who came for a fight with the police.

“We did everything that we could to try to calm the situation… to disperse that crowd to encourage them to leave but ultimately it unfortunately turned to violence.”