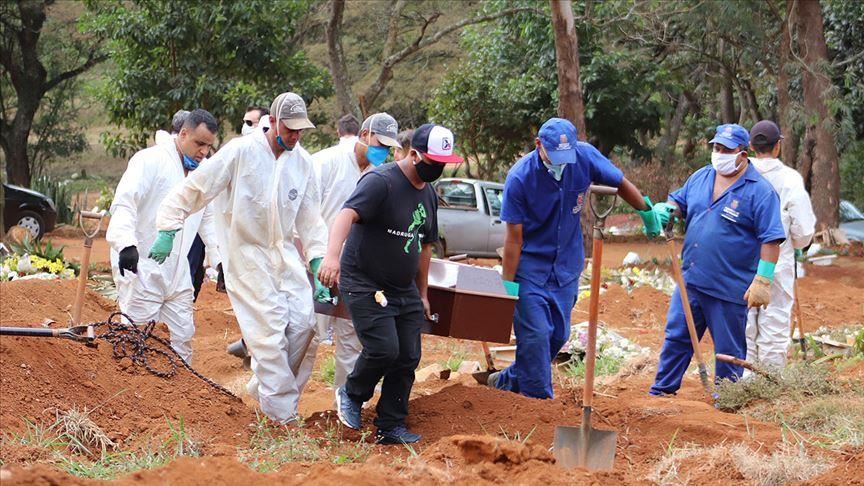 Brazil today surpassed the 170 thousand deaths caused by the covid-19 and completed ten days with an upward trend in the moving average of deaths. The information was collected by the consortium of press vehicles from which the Twitter is part of.

In the last 24 hours, the country registered 638 new deaths caused by the disease caused by the new coronavirus, reaching a total of 170,179 deaths since the beginning of the pandemic.

According to data from Johns Hopkins University, Brazil is the second country with the highest number of deaths by covid-19 in the world, behind only the United States – with a total of 259,045 deaths caused by the disease until this Tuesday night (24).

Across the country, 33,445 new positive tests for the disease were recorded from yesterday to today. The total number of people infected with the new coronavirus since the beginning of the pandemic is 6,121,449. There were an average of 491 deaths in the last seven days.

According to the Ministry of Health, in the last 24 hours, the country registered 630 new deaths, reaching a total of 170,115 deaths since the beginning of the pandemic.

From yesterday to today, across the country there were 31,100 positive diagnoses for covid-19. Since the beginning of the pandemic, Brazil has had 6,118,708 infected with the new coronavirus

The Ministry reported that 5,476,018 people recovered from the disease, with another 472,575 being followed up.

The data from the media consortium show that, with an average of 491 deaths in the last seven days, Brazil had a variation of 54% in relation to the rate of two weeks ago, which indicates an acceleration of the average of deaths. Since November 15, the country has registered consecutive increases.

Ten states showed a tendency to accelerate while six others fell. Ten states and the Federal District maintained stability.

Two regions showed an increase in the average: Midwest (51%) and Southeast (126%). The South left an accelerating trend and returned to stability with 11%. Northeast (4%) and North (7%) were also stable.

It is important to note, however, that the increases in some states can be explained by the blackout of data that the country experienced in early November. On the 6th, the Ministry of Health’s covid-19 death registration platform began to have problems. Several states reported difficulties in entering data on the e-SUS platform and released incomplete or even outdated information for several days.

The state of São Paulo was one of the most affected, with no deaths reported for five consecutive days.

In the coming days, this problem in the system is expected to impact the percentage of upward, stable or downward trend in the affected states and also in the national trend.

To measure the situation of deaths due to covid-19, experts indicate using the moving average of deaths, which calculates the average of records observed in the last seven days. The operation is the most suitable to observe the trend of the statistics, as it balances the abrupt variations of the numbers throughout the week.

The consortium of press outlets adopted this period to verify fluctuations in the moving average. It is possible to speak of a drop in numbers when the decrease is greater than 15% if verified in the last 14 days – in this case, the period of the last two weeks. If the numbers increase more than 15%, the epidemic accelerates. Intermediate values ​​indicate stability.

As Delta Variant Cases Rise, WHO Asks Fully Vaccinated to Keep Masks On 0