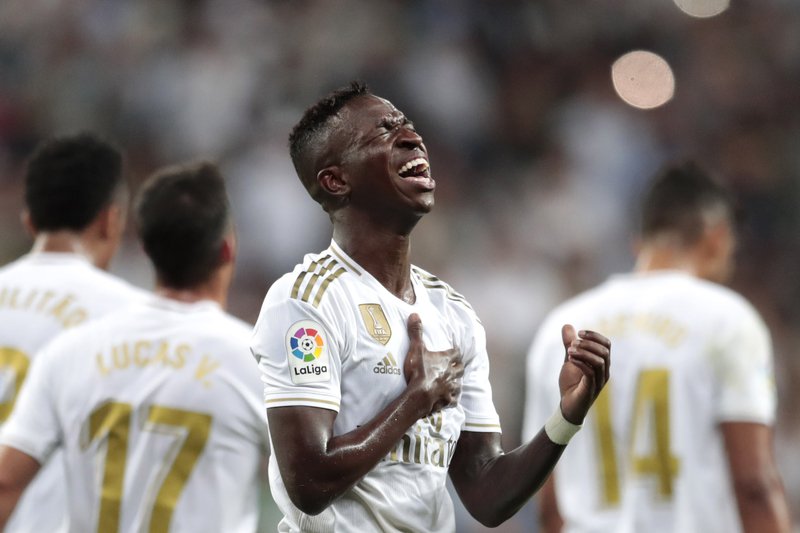 Real Madrid’s teenage Brazilian duo Vinicius Junior and Rodrygo Goes sent them top of La Liga as both scored in a 2-0 win over Osasuna on Wednesday.

Vinicius ended a goal drought which had dragged on since February with a deflected effort in the first half from the edge of the box.

Striker Luka Jovic spurned two good opportunities and had a goal ruled out for offside as Real dominated, with debutant substitute Rodrygo curling home to seal the win shortly after coming on.

Real Madrid climbed to the top of the standings with 14 points from six games, one point and one place ahead of Atletico Madrid, whom they face on Saturday in the derby at the Wanda Metropolitano.

“We’re really pleased with the result, the work we put in and for the win,” said Real winger Lucas Vazquez.

“I’m really happy for (Vinicius), he’s a great lad, he works hard and I’m super happy for him.”

Coach Zinedine Zidane made several changes to the side that beat Sevilla, leaving out Gareth Bale entirely, and choosing to start with Eden Hazard, Thibaut Courtois, Karim Benzema and James Rodriguez on the bench.

Victory in Andalusia steadied the ship after a heavy Champions League defeat by Paris St Germain and this win eased supporters’ worries further.

The hosts should have opened the scoring in the 18th minute when Alvaro Odriozola’s charge up the right flank left to a scramble in the box and Jovic stabbed over from close range.

Vinicius sent Real ahead in the 36th minute with a long-range effort which deflected off Raul Navas and flew into the top corner.

It was the Brazilian’s first goal since Zidane returned in March and the 19-year-old cried tears of joy as he celebrated.

Jovic, hunting his first Real goal, blew another big chance in the second half before finding the net, only to see his effort ruled out by VAR because he was narrowly offside.

The 18-year-old Rodrygo, who arrived in June from Santos for €45 million, wrapped up the win a minute after entering the fray, surging into the area and sweeping home