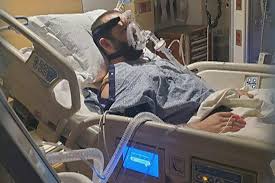 A patient in Boston waiting for an available heart has been removed from a heart transplant list because he’s unvaccinated.

DJ Ferguson, 31, was first on the list to receive a heart transplant at Brigham and Women’s Hospital, his family says. And now the father three is no longer eligible allegedly because he is refusing to get vaccinated for COVID-19. Ferguson’s father, David Ferguson, says his son doesn’t believe in the vaccine.

“It’s kind of against his basic principles, he doesn’t believe in it. It’s a policy they are enforcing and so because he won’t get the shot, they took him off the list of a heart transplant,” David told the CBS Boston, the New York Post reports. “My son has gone to the edge of death to stick to his guns and he’s been pushed to the limit.”

According to Brigham and Women’s Hospital, there is research that shows transplant patients are more likely to die from COVID-19 than non-transplant patients. “We do everything we can to ensure that a patient who receives a transplanted organ has the greatest chance of survival,” a spokesperson for the hospital told The Post.