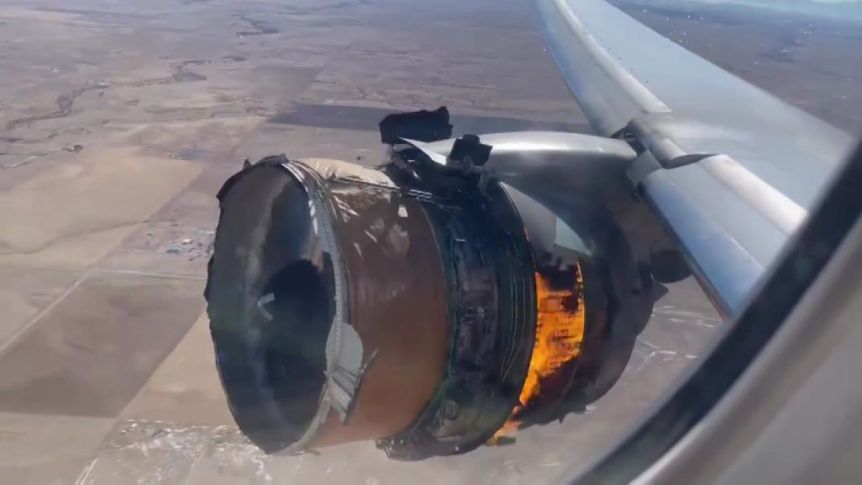 US plane manufacturer Boeing has recommended grounding all 777 aircraft with the same type of engine that suffered failure and shed debris over Denver on Saturday.

It said 128 jets should be suspended until inspections are carried out.

Flight 328, carrying 231 passengers, was forced to make an emergency landing at Denver airport. No-one was injured.

“While [an] investigation is ongoing, we recommended suspending operations of the 69 in-service and 59 in-storage 777 aircraft powered by Pratt & Whitney 4000-112 engines,” the company said in a statement.

Pratt & Whitney said it had dispatched a team to work with investigators.

According to the Federal Aviation Administration (FAA), United is the only US airline flying this model of 777, with the others being in Japan and South Korea.

Korean Air, which has six planes in operation and 10 in storage, said it was awaiting instruction from South Korean regulators regarding any measures for its 777 jets.

United Flight 328, bound for Honolulu, suffered a failure in its right-hand engine. Debris from the jet was found scattered over a nearby residential area after it returned to Denver airport.

“Based on the initial information, we concluded that the inspection interval should be stepped up for the hollow fan blades that are unique to this model of engine, used solely on Boeing 777 airplanes.”

The FAA met representatives from the engine firm and Boeing on Sunday evening.

The initial finding of the National Transportation Safety Board (NTSB) is that most of the damage occurred in the right engine, where two fan blades were fractured and other blades also impacted. The main body of the aeroplane suffered only minor damage.

The engine failure is the another blow for Boeing after its 737 Max aircraft was grounded for 18 months following two aviation accidents that left 346 people dead.

Loading...
Newer Post
US President to Mark the Many Lives Lost to COVID-19 With a Ceremony
Older Post
Women should not be deterred from making reports to the police