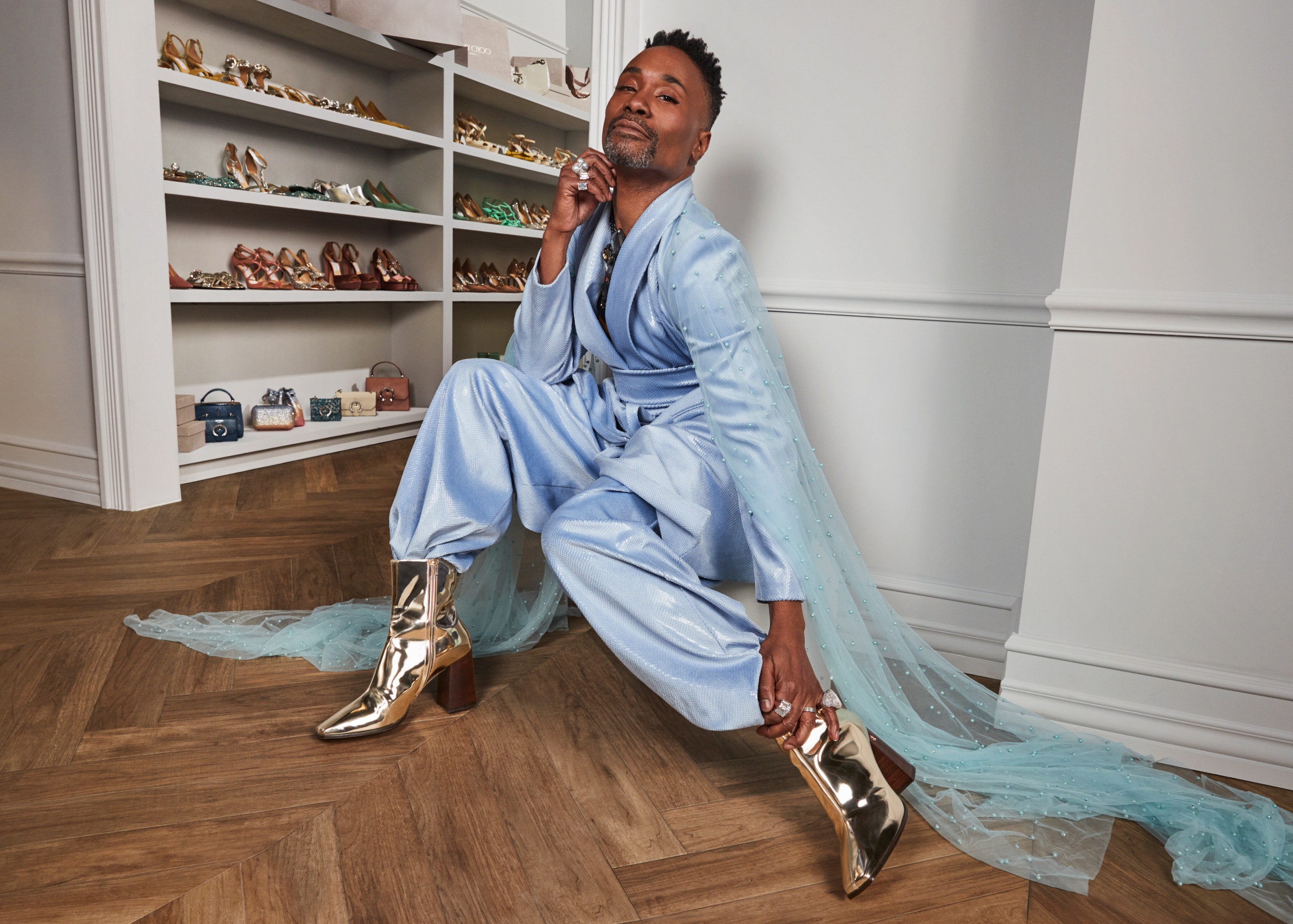 Billy Porter is known for breaking the Internet with his fashion choice on the red carpet.

Remember his Oscars gown by Christian Siriano? Or his custom Egyptian sun god look for the 2019 Met gala? And completing his ensembles are usually a staggering pair of high heels, something he’s always had an obsession with.

“Being a gay little boy, I was very attracted to my aunt Sharon’s high heels in her closet,” Porter tells Vogue. “I would try them on, and I couldn’t wait until my feet were big enough to fit them for real.”

It’s only natural, then, that the shoe lover is finally getting his very own footwear collection. Today, Porter launches his first shoe collaboration with Jimmy Choo, including stiletto pumps, flat loafers, platform boots, and a few pouch bags as well. “I wanted it to run the gamut, from masculine to non-binary to completely feminine,” says Porter. “We should be able to express ourselves in any way that we want with our [style.]” 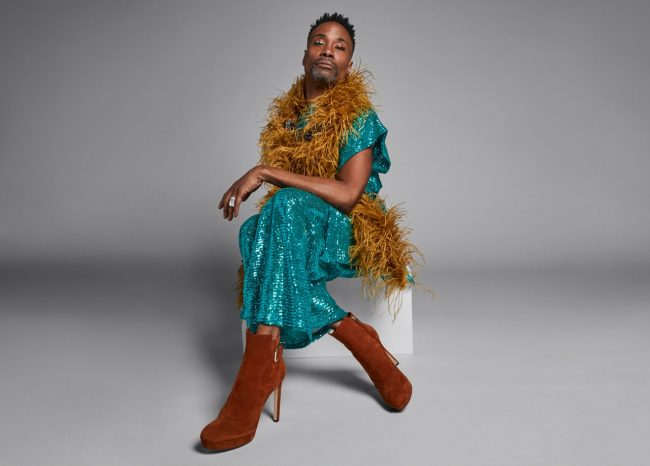 Prices for the line range from $650 to $1,095, and to commemorate the release, Jimmy Choo will also be donating $100,000 to The Trevor Project, a non-profit whose mission is to end suicide amongst LGBTQ+ youth. It’s a cause close to Porter’s heart. “The LGBTQ+ community is under attack once again, legislatively, like never before,” says Porter, pointing to many of the Republican party’s anti-LGBTQ+ laws. “The [government’s] goal is to make our very existence illegal. Anything that I can do to move the conversation forward politically, I’m doing it. There is no ‘shut up and sing.’ We combat hate with love.”

For Porter, the basis of this new collaboration is rooted in something even more personal. It’s actually inspired by his mother, who he calls a fighter and survivor. “My mother has a degenerative, neurological condition that was due to medical malpractice. She’s 76-years-old and there’s never been a diagnosis for it,” says Porter. “Now, she has no mobility in her body at all. One of her biggest dreams was to be able to walk in heels—so I stand in my heels, by proxy, for my mother’s deferred dream.” 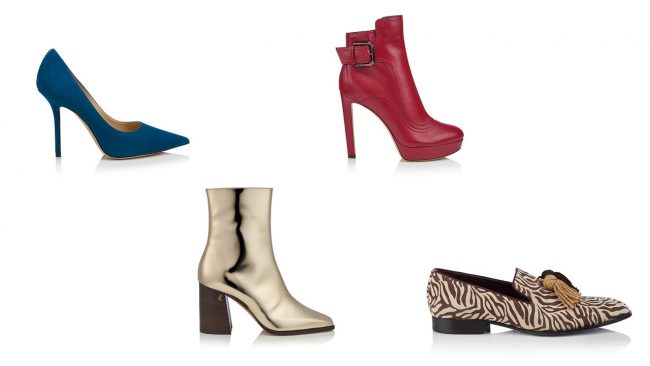 When it came time to design the assortment of shoes, Porter and Jimmy Choo’s Sandra Choi knew they wanted to release it during Pride month. “Billy is a true original,” says Choi. “He embodies the Jimmy Choo ethos with his daring spirit on and off the red carpet.” As a result, Porter also drew from the history and iconography of queer style to find the right look and feel for it. “The inspiration was Pride, and everything goes back to the flag,” he says. Porter wanted to take the iconic rainbow flag and use it as a reference for the shoe colorways. “The pride flag is beautiful and I love the new version with the transgender colors, but for my taste, I’m not a big primary color person,” says Porter. “I wanted to take the colors of the flag and reinterpret them to feel a little bit more luxurious.”

A sense of queer pride, particularly when expressed through fashion, is something Porter has always made his M.O. on the red carpet—so it makes perfect sense for him to continue that as a shoe designer. “The messaging that I received from my entire life was that my queerness would be my liability,” says Porter. “For the first 20 years of my career, I ran away from that queerness, and I tried to fit in. Then Kinky Boots happened.” Ever since slipping into those iconic ruby-red heels on Broadway, Porter says he approaches dressing with 100% confidence—heels and all. “I’m so blessed to have played Lola,” says Porter. “Embracing the feminine side of myself made me feel much stronger and empowered. I realized I don’t need the excuse of a character to wear a heel.” 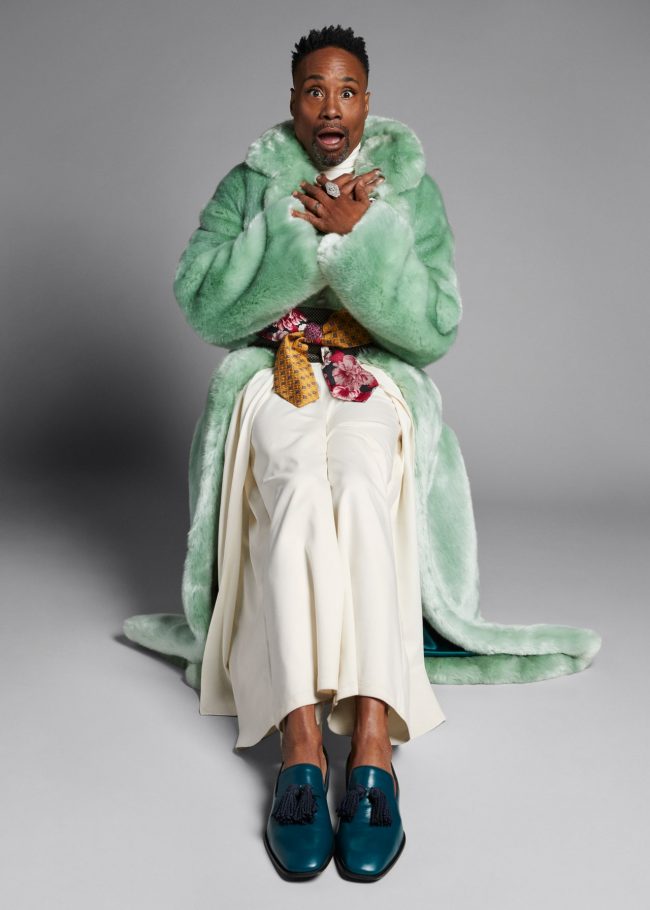 So what’s next for the star, now that he’s dropped a shoe line and wrapped his smash-hit series Pose? Expect him on the red carpets again soon, of course—but it seems he also has a few more unexpected projects in the pipeline. “I am directing my first film for Orion Pictures, called What If?,” says Porter. “I’ve also been working on new music for the last two months, I have a single coming out at the end of the summer, and I also have just finished my memoir, releasing in the fall.” Oh, and he’ll also be portraying the Fairy Godmother in September’s Cinderella. Just a little bit of a busy summer, then. Luckily he has the perfect new pair of shoes to be running around in.

Pulchan calls on powers that be to reduce prison population 0