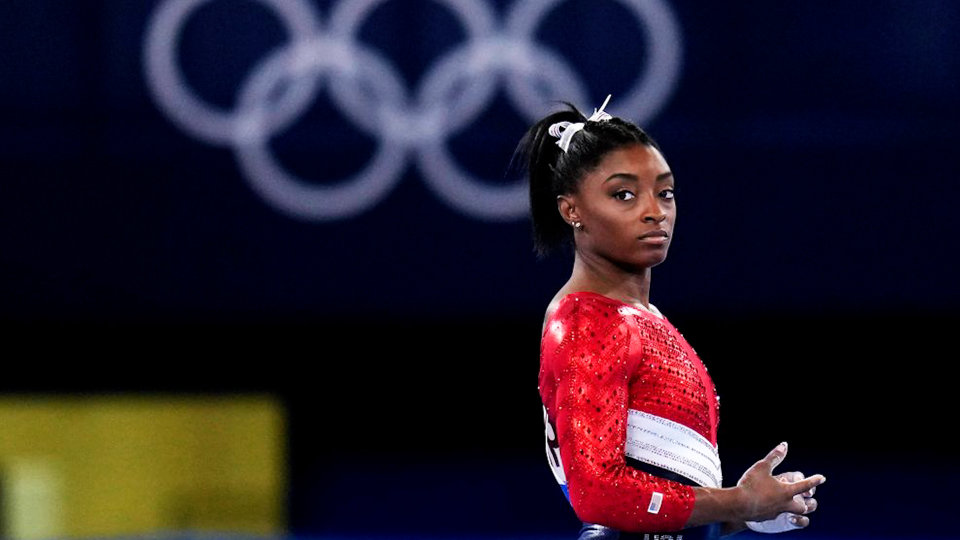 Biles, the most successful US gymnast of all time, said she had to focus on her mental health after pulling out of the women’s team final on Tuesday.

The head of the US Olympic team and fellow athletes praised Biles’ decision to prioritise her mental wellbeing.

The 24-year-old has reached all five individual finals in Tokyo.

She was due to defend her all-around title on Thursday before competing in the finals of the vault and uneven bars on Sunday, 1 August, floor on Monday, 2 August and beam on Tuesday, 3 August.

USA gymnastics said: “Simone will continue to be evaluated daily to determine whether or not to participate in next week’s individual event finals.

“We wholeheartedly support Simone’s decision and applaud her bravery in prioritising her wellbeing. Her courage shows, yet again, why she is a role model for so many.”

Biles scored her lowest Olympic vault score in the opening rotation before withdrawing from the team final.

She left the arena but returned to support her team-mates as the defending champions claimed silver behind the Russian Olympic Committee.

Team silver in Tokyo was Biles’ sixth Olympic medal and took her tally of Olympic and World Championship medals to 30.

Afterwards, Biles said: “After the performance I did, I just didn’t want to go on. I have to focus on my mental health. I just think mental health is more prevalent in sports right now.

“We have to protect our minds and our bodies and not just go out and do what the world wants us to do.

“I don’t trust myself as much anymore. Maybe it’s getting older. There were a couple of days when everybody tweets you and you feel the weight of the world.

“We’re not just athletes. We’re people at the end of the day and sometimes you just have to step back.”

WHO tells the world not to panic over Omicron variant 0