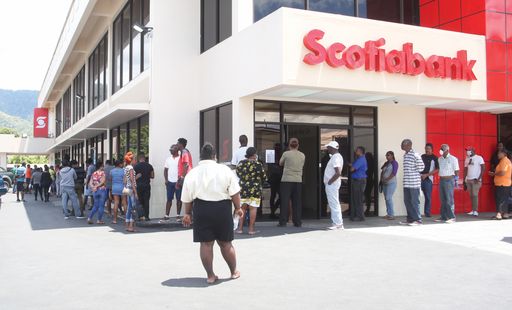 The Banking, Insurance and General Workers Union is condemning an announcement by Scotia Bank this week to retrench one hundred and forty-nine workers.

BIGWU describes the action as unjust and a continued action of seeking profits above all else.

In a media release Friday, BIGWU noted with serious concern that many of the jobs and services done by the workers will now be outsourced to the Dominican Republic and this is tantamount to job trafficking.

It said this action by Scotia Bank will put these one hundred and forty-nine workers on the breadline in the midst of a global pandemic and economic hardship.

BIGWU said the families of these workers will also be adversely affected and there will be severe social dislocation by the unconscionable actions of this Canadian multination bank.

The release said the actions of this bank in closing several of its branches will also cause hardships and inconvenience to its customers, many of whom are senior citizens and pensioners still grappling with the concept of this digital transformation being forced upon them when what they desire is simply personal and humane service in their senior years.

The BIGWU is calling upon Scotiabank to review this decision and stands ready to assist the affected workers and others in the bank who predictably will be targeted for similar treatment by the bank before year end.

The trade union called on Labour Minister, Stephen Mc Clashie, must act now and intervene to avert this unjust action of the employer and to ensure that the full provisions of the relevant Labour legislation are complied with.