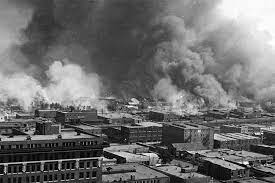 President Joe Biden will visit Tulsa, Oklahoma today to commemorate one of the deadliest racial massacres in American history. A white mob burned “Black Wall Street” to the ground, killing and injuring hundreds of African Americans and displacing others from their homes.

Biden will offer remarks commemorating the 100th anniversary of the attack and speak with the three remaining survivors between the ages of 101 and 107.

Before the trip, the White House released a set of measures aimed at promoting racial equity. This includes a new inter-agency campaign to address housing discrimination and new directions to increase government contracting with small, minority-owned firms by $100 billion over the next five years.

In a proclamation issued Monday, Biden called on Americans “to commemorate the tremendous loss of life and security that occurred over those 2 days in 1921, to celebrate the bravery and resilience of those who survived and sought to rebuild their lives again, and commit together to eradicate systemic racism and help to rebuild communities and lives that have been destroyed by it.”

Biden will pledge to the last survivors of the massacre that the nation will never forget the incident, tracing a history of Black endurance and brutal racist retaliation.

The statement continued, “We honor the legacy of the Greenwood community and of Black Wall Street by reaffirming our commitment to advance racial justice through the whole of our government, and working to root out systemic racism from our laws, our policies, and our hearts.”

The Tulsa race massacre of May 31, 1921, remained virtually unnoticed by sitting US presidents for nearly a century, never prompting a visit to mourn those killed in the once-thriving Black enclave of Greenwood until now.

“This is very, very significant that the president of the United States is coming here,” said Scott Ellsworth, a professor at the University of Michigan and author of “Death in a Promised Land: The Tulsa Race Riot of 1921.” He said, “Everyone I’ve spoken to in the community has supported this.”

According to Ellsworth, a commander-in-chief addressing “the worst single incident of racial violence in American history,” is noteworthy for Biden’s visit’s focus on the centenary and larger efforts to reconcile with the country’s previous racial equality failures.

“The Black citizens of Tulsa were let down by their city government, by their state government, but they were also let down by the federal government in this massacre,” Ellsworth said. “There was never any sort of federal investigation despite the fact that over 1,000 Black homes and businesses were burned to the ground and more than 10,000 people were made homeless. The federal government never stepped in and tried to figure out what happened.”