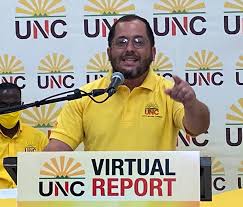 Bharath incapable of leading UNC to victory against the PNM

Vasant Bharath and his team are incapable of leading the United National Congress to victory against the PNM.

Speaking at UNC’s virtual Monday night forum, Lyder called Bharath ‘the englishman’ and accused him of being out of touch with the needs of the party.

He said: “That Englishman Vasant Bharath, he is not the enemy, he is sitting down drinking Earl Grey tea and eating cucumber sandwiches with knife and fork, neither is the enemy his slate of bitterness. The real enemy is Keith Christopher Rowley and his PNM party.

“It is this wicked PNM that brought this country to its knees. Decimated the rights of citizens, this PNM broke down our social services all of this while they spent every waking moment to wholesale the assets of our country to foreigners and friends.”

Lyder said Bharath and his team were incapable of leading the party to victory against the PNM and he urged members to choose wisely for the internal elections on December 6.

CoP: Law Assoc. should be concerned for law-abiding citizens 0