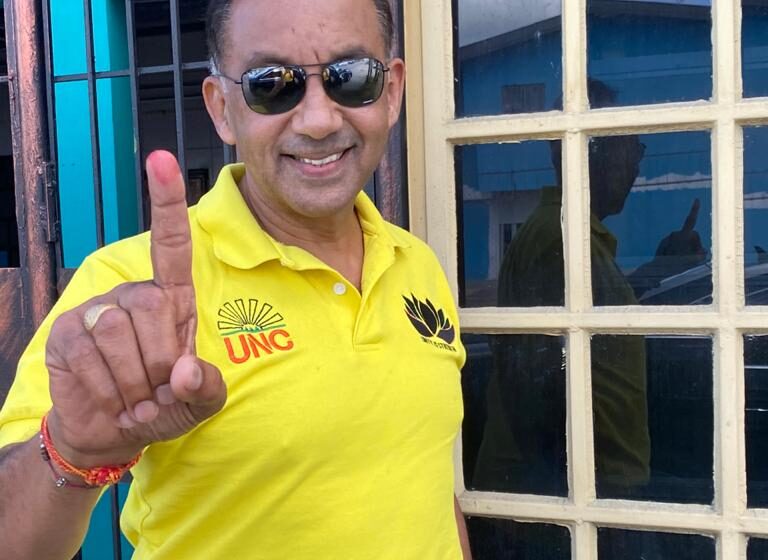 UNC councillor for Aranguez/Warner Village and a member of Kamla Persad-Bissessar’s Star Team, Amit Sooknanan, had some choice words for political leadership contender Vasant Bharath this morning, after Bharath showed up at the polling station at the Aranguez Community Centre at Mehalal Street wearing a UNC jersey with the lotus symbol of his team.

Sooknanan said he was outside the station and saw Mr Bharath going inside with his UNC clothing… “which is legal, but he was advertising a lotus flower on his jersey.”

He said he told Bharath that he should know better with regards the jersey and he asked him to step aside.

Sooknanan claims that when Bharath stepped back into the station he told him once again about that jersey and said “You know if I come here with a t-shirt and banner with our Star emblem you know you would have a problem.”

It was then that Sooknanan claims that Bharath pulled down his mask an said ‘F off’.”

Sooknanan claimed to have a video of the incident.

But Bharath said this did not happen.

As seen by footage obtained by CCNTV6, Bharath is conducting an interview while the member of the Star team is shouting ‘follow the rules’ in the background.

Bharath said “There is nothing in the election rules nor in the constitution of the party that precludes us from anything today. We can wear whatever we want.”
“This is not EBC rules. Had there been EBC rules then all of the irregularities that have taken place that we have talked about in the last six weeks would have been cured.”