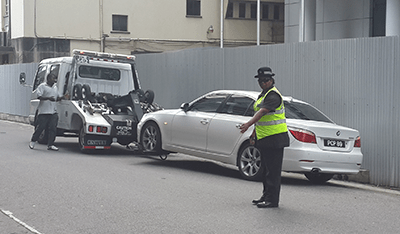 Port of Spain Mayor, Joel Martinez has announced the resumption of vehicle wrecking in the city come April.

According to an Express report, Martinez said: “I want to be clear, it is not that I want wrecking to resume. I would prefer a scenario where it was not, where we had parking meters, for instance, to govern how persons park and maybe even zones via which they operate. However, we have received several complaints, both written and orally, over the last year or so of persons parking in and around the city indiscriminately.

“Blocking access and parking in such a manner that larger vehicles, such as fire trucks, cannot manoeuvre in the way they would need to. The congestion in the city is also getting out of hand, and something needs to be done,” he said.

“At this point in time, there is no other alternative. Yes, we could seek to get more police officers and traffic wardens on the streets, but after you receive your ticket, that does not change the issue ­itself of indiscriminate parking.”

He emphasised that this was not a “money-making” venture by the Port of Spain City Corporation. To this end, he noted that on April 8, he expected to meet with officials from the Traffic Management Branch for other suggestions on how best the situation could be ­addressed.

One new Covid case in Tobago 0