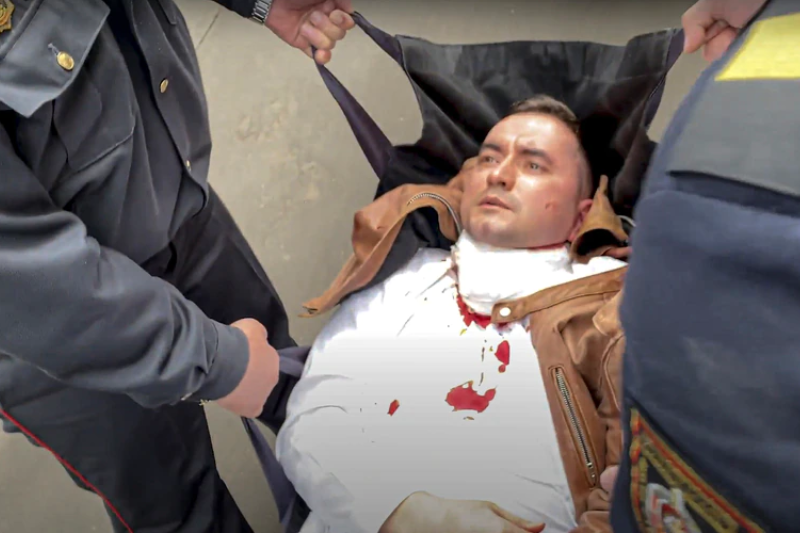 Belarusian Activist Stabs Himself in Court

A Belarus activist stabbed himself in the throat in the middle of a court hearing in Minsk to protest what he said was a warning from government officials threatening to arrest his family and neighbors.

Stsyapan Latypau, who has been jailed since September 2020, said in court that authorities told him if he didn’t enter a guilty plea to participating in mass protests that his family and neighbors would face arrest and prosecution as well.

“Father, after meeting with you, GUBOPiK [the Interior Ministry’s Main Directorate for Combating Organized Crime and Corruption] came to me and warned that if I didn’t admit my guilt, then I would be thrown in a cell with hardened criminals and criminal cases would be launched against my relatives and neighbors,” Latypau told the court before cutting himself with a pen, according to Radio Free Europe/Radio Liberty.

Blood spilled onto his clothes as he was rushed to a local hospital. Exiled opposition leader Svyatlana Tsikhanouskaya railed against the Belarusian government on Twitter.

“Belarusian activist, political prisoner Stsiapan Latypau cut his throat in the courtroom today,” Tsikhanouskaya said on social media. “He was threatened with the persecution of his family if he didn’t admit himself guilty. This is the result of state terror, repressions, torture in Belarus. We must stop it immediately.”

Belarus and its embattled President Alexander Lukashenko is facing international pressure for forcing down a Ryanair jet last month over its country’s airspace and arresting journalist Roman Protasevich.

Protasevich, an exiled journalist critical of Lukashenko, was a passenger on the flight traveling from Athens, Greece, to Vilnius, Lithuania, before the carrier was forced to land.

The United States and other western countries have imposed sanctions and restrictions against Lukashenko’s regime over Belarus’ August election they deemed to be neither free nor fair due to its security forces escalating crackdown on subsequent protests that forced opposition leaders into exile.

Loading...
Newer Post
GG warns – Don’t be baited by others to break the law
Older Post
Death Penalty for Teacher Who Raped Multiple Students in China