It has been almost a week since former Public Administration Minister Marlene McDonald secured her TT$2million bail and returned to her home in St. Augustine. But her companion, Michael Carew, was not that lucky.

Carew and one other man charged alongside McDonald, Wayne Anthony, are still in jail after their bail was rejected. It seems both parties will need to find bail, such as property, which is higher in monetary value than their bail amount. Carew and Anthony along with McDonald, Vic­tor McEachrane and Edgar Zephyrine were charged with over 40 offences including conspiracy to defraud and money laundering. Carew was granted TT$500,000 bail and Anthony was granted TT$400,000 bail. Today, they remain in jail 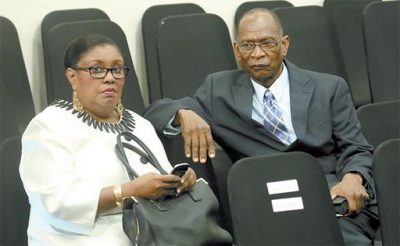 McDonald, McEachrane and Zephyrine were released from jail last week after securing their bail.