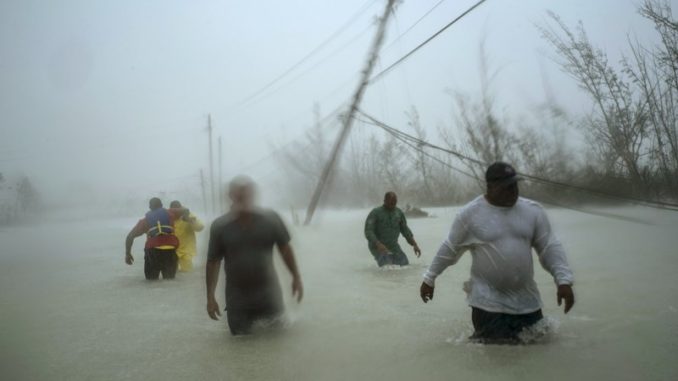 Rescuers searched for survivors in the Bahamas Wednesday after Hurricane Dorian, the most damaging storm to strike the island nation, left in its wake a flooded landscape dotted with pulverized homes and beached boats.

The scope of the damage and humanitarian crisis was still unfolding as aerial video of the Abaco Islands in the northern Bahamas showed wide swaths of destruction and officials warned the current death toll of seven was likely to rise. Aid agencies estimated that tens of thousands of people would need food and other support.

“We are in the midst of one of the greatest national crises in our country’s history,” Bahamas Prime Minister Hubert Minnis told a news conference. “No effort or resources will be held back.”

“We can expect more deaths to be recorded. This is just preliminary information,” Minnis said.

“Marsh Harbor has suffered, I would estimate, in excess of 60 percent damage to their homes,” Minnis said, referring to the port on Great Abaco.

“The Mud, as we know, has been completely destroyed or decimated,” he said referring to a shantytown.

Aerial video of the Bahamas’ Great Abaco Island showed miles of flooded neighborhoods, littered with upturned boats, and shipping containers scattered like toys. Many buildings had walls or roofs partly ripped off.

After rampaging through the Caribbean as one of the most powerful hurricanes ever recorded, Dorian wind speeds dropped Tuesday to make it a Category 2 storm on the five-step Saffir-Simpson intensity scale. It maintained that level Wednesday, but forecasters warned it was still dangerous.

Residents of coastal Florida, Georgia and South Carolina were bracing for Dorian’s approach Wednesday, with the National Hurricane Center warning the slow-moving storm could make landfall in South or North Carolina Thursday or Friday.

Georgia Governor Brian Kemp extended a state of emergency to cover 21 counties as the storm tracked north towards its coast. The emergency covers more than 900,000 Georgia residents, of whom over 400,000 have been ordered to evacuate, according to the state Emergency Management and Homeland Security Agency.

As many as 13,000 homes in the Bahamas may have been destroyed or severely damaged, the International Federation of Red Cross and Red Crescent Societies said, in the strongest storm to hit the Bahamas.

Restoring destructed areas could cost the Bahamas “hundreds of millions, if not billions” of dollars, said the island’s deputy prime minister Peter Turnquest.

“We have had catastrophic damage to both the public and private infrastructure that will take hundreds of millions, if not billions, to fund recovery and reconstruction,” Turnquest said.

“With approximately 70% of the homes underwater, we anticipate tremendous social and economic dislocation and disruption in the short term. The mental health of those who have endured this monster storm is a priority concern of the government.”

“It’s total devastation. It’s decimated. Apocalyptic. It’s not rebuilding something that was there; we have to start again,”  said Lia Head-Rigby, who runs a local hurricane relief group, after flying over the Abaco Islands.

Food may be required for 14,500 people in the northern Bahamas’ Abaco Islands and 45,700 people in Grand Bahama, the U.N. World Food Programme said. The preliminary estimates were based on an assessment by representatives of Caribbean nations, the WFP and other groups.

More Than 60 Million Ballots Already Cast, For the Upcoming US Elections 0