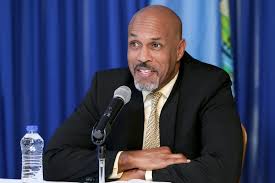 The Tobago House of Assembly is set to spend an estimated $30 million for the construction of an indoor sporting facility in Bacelot.

THA Secretary for Sports and Youth Affairs, Jomo Pitt, made the revelation on Wednesday, during a post-executive council media briefing.

The contract for the Bacolet Indoor Sporting Facility, was awarded to Towers International in August, and according to Mr Pitt, the company was given three months to finalise drawings for the facility.

He said they anticipate the construction to begin in a few months and be completed in a year’s time.
The facility will cater to all major sporting disciplines, including netball, basketball and even futsal.

Pitt, who intends to quit politics at the end of this term, said he was saddened however, that he would not be in office to see the project completed.

Sports Minister Shamfa Cudjoe, said “I am pleased that this government decided to make this investment in Tobago and finally deliver on this promise. When I assumed duties as minister of sport two years ago, I met with both THA and Udecott on pursuing this project. The netball, basketball and other sporting groups in Tobago will finally have access to a world class indoor sporting facility, and we’ll be able to host regional and international games thus improving our attractiveness as a sport tourism destination. I therefore look forward to the completion of the project, which will complement the newly refurbished Dwight Yorke Stadium.”