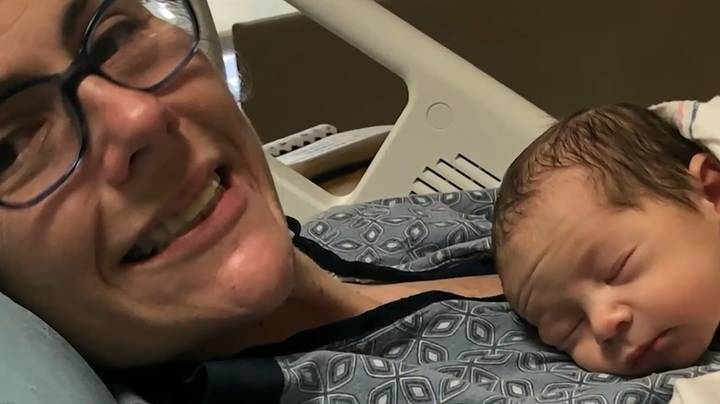 Melissa Surgecoff got the surprise of her life when she gave birth to her son Liam while sitting on the toilet, especially considering she didn’t even know she was pregnant!

Surgecoff laughed about her childbirth experience on the Today show, remembering how she had missed some obvious pregnancy signs. The 38-year-old woman thought she was passing a kidney stone.

Surgecoff explained that early in the morning on March 8, she thought she was experiencing intense menstrual pains. But as the day went on, the “cramps” got faster and more intense, prompting her to asked her fiancé, Donnie Campbell, to call 911 and tell them she was passing a kidney stone.

“The only relief I would get was sitting on the toilet,” Surgecoff said. “So I was in the bathroom, and I…couldn’t sit still. I was screaming; I was trying not to be loud like I didn’t know what this was.” That’s when she finally felt like something had been expelled out of her.

“I look in the toilet, and I still didn’t know what it was,” she admitted. “And I thought I basically lost an organ because I didn’t know!”

Surgecoff explained that she stood up and still didn’t realize what was in the toilet bowl until her fiancé examined it.

“I’m screaming, I’m freaking out, I’m in shock,” she recalled. “I don’t know what’s going on, and Donnie went to the toilet, and he rescued the baby.”

Campbell said he initially thought it was feces. But once he realizes it was a baby, he sprang into action, cleaning the infant off with his sweatshirt.

“I kept watching his stomach, and he kept breathing on his own, and then it became more of a celebration,” Campbell explained. “I stood up and held him close to my heart against my body to keep him warm,” the new father said.