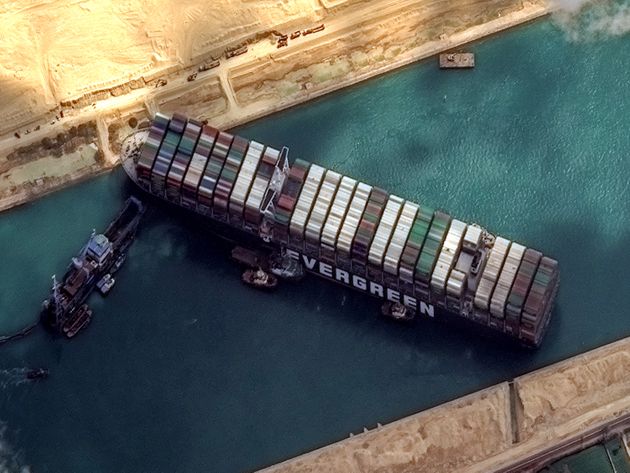 A giant container ship remains stuck across Egypt’s Suez Canal after attempts to dislodge it on Saturday’s high tide failed.

Canal officials said however that some progress had been made, and that they hoped the ship could be afloat again by Sunday evening.

The Ever Given has been wedged in the canal – one of the world’s busiest trade routes – since Tuesday.

More than 300 ships are stuck on either side of the blockage.

Some vessels have had to reroute around Africa.

On Saturday about 20,000 tonnes of sand was dredged, and 14 tugboats pulled and pushed the Ever Given in order to try to dislodge it.

Although strong tides and winds complicated efforts to free the ship, the tugboats managed to move it 30 degrees in two directions.

Footage posted on Twitter appeared to show the tugboats honking their horns to celebrate this small victory.Initial reports said the 400m-long (1,300ft), 200,000-tonne vessel ran aground due to high winds and a sandstorm that affected visibility.

However, Mr Rabie said weather conditions were “not the main reasons” for the ship’s grounding.

“There may have been technical or human errors,” he told reporters, without giving details. “All of these factors will become apparent in the investigation.”

General Osama Rabie, Chairman of the Suez Canal Authority, said that water had started running underneath the vessel.

“We expect that at any time the ship could slide and move from the spot it is in,” he told a press conference.

He added that he hoped it wouldn’t be necessary to remove any of the 18,300 containers on board to lighten the ship’s load.

Father of 2 electrocuted while preparing for Hindu ritual 0