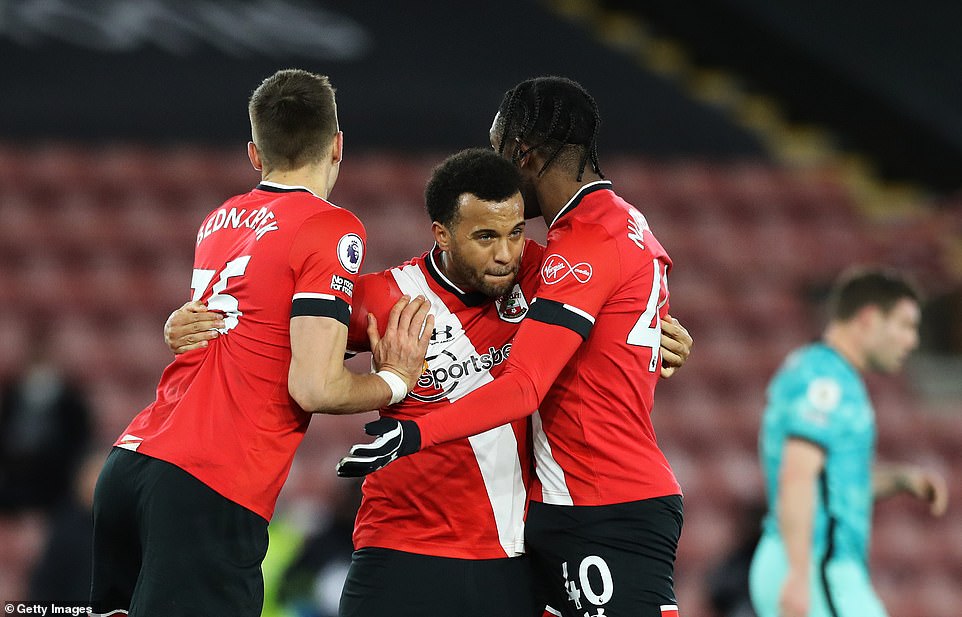 The English champions remain top of the table on goal difference over Manchester United, but have now played a game more than the Red Devils.

Southampton are only four points off the top as they moved up to sixth in a tightly bunched division with just seven points separating Liverpool from West Ham in 10th.

A famous win continued a fine season so far for the Saints, and the size of the achievement was reflected in tears of joy from manager Ralph Hassenhuttl at full time.

A first league defeat in three months may hasten Liverpool’s search for a centreback in the January transfer window.

Without the injured Virgil van Dijk, Joe Gomez and Joel Matip, Klopp started two of his first-choice midfielders from their title-winning campaign, Fabinho and Jordan Henderson, together at the heart of his defence.

Southampton had not scored in their last three games to temper their hopes of a push for European football, but took just two minutes to break the deadlock in style through former Liverpool striker Ings.

Liverpool did not deal with James Ward-Prowse’s angled freekick into the box and Ings perfectly hooked his shot over Alisson Becker into the far corner.

Southampton had key absentees themselves with goalkeeper Alex McCarthy missing due to a positive test for coronavirus, while Oriol Romeu, Jannik Vestergaard and Che Adams were out injured.

Fraser Forster was making his first Saints appearance since May 2019, but the former England international was rarely tested to earn his clean sheet.

The visitors could easily have found themselves 2-0 down before the break when Southampton substitute Nathan Tella was inches away from his first senior goal with a curling effort from the edge of the area that flew just wide.

If Jurgen Klopp’s men were too passive in the first half, they started the second half with the intensity they have made their trademark in recent seasons as Southampton were pinned inside their own half.

Sadio Mane was the visitors’ biggest threat on his return to St Mary’s as Jack Stephens made a last-ditch challenge to block his route to goal before Kyle Walker-Peters was lucky to escape without conceding a penalty for obstructing another burst from the Senegalese into the box.

Thiago Alcantara was making just his second Liverpool start since a much-anticipated move from Bayern Munich, but even the Spaniard’s range of passing could not cut through Southampton’s determined defence.

Mane had Liverpool’s only shot on target 15 minutes from time when his tame effort was easily held by Forster low to his left.

Southampton could have sealed a huge win moments later when Alisson was caught well off his line by Yan Valery, whose shot lacked the power to beat Henderson in a race to the goal line.

Liverpool so often dug themselves out of problems with late goals in romping to the title last season, but have failed to do so over the festive period, also dropping points against struggling West Brom and Newcastle.

United and Manchester City now hold the upper hand in the title race as they can both move ahead of Liverpool should they win their games in hand.

Technical issues being investigated on the yet to arrive ferry, the Buccoo Reef 0