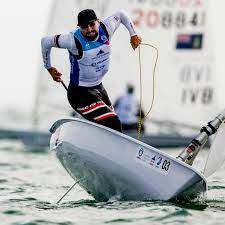 Trinidad and Tobago’s lone sailor Andrew Lewis began his medal run at the Tokyo Olympic Games on Sunday in the Men’s one person dinghy laser competition.

Competition in a field of 35, Lewis finished 23rd, clocking an average speed of 5.1 knots in race one at the Enoshima Yacht Harbour.
He achieved a top speed of 8.4 knots during the race.

Lewis was given 23 points in the race.

The second race of the men’s dinghy was postponed.

Lewis is carded to compete in the remaining nine races of the men’s dinghy in the coming days.