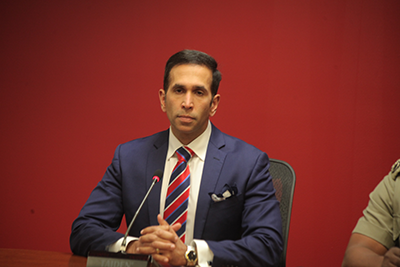 Attorney General Faris Al-Rawi has revealed that the government intends to host stakeholder consultations in a bid to formulate proper legislation regarding PH taxi drivers.

This follows a call by Prime Minister Dr Keith Rowley for the AG and Works Ministry to come up with ways to regulate that sector.

And, Al-Rawi assured that moves towards legislation are being made.

Al-Rawi in an interview with GML, said “This (PH regulation) matter isn’t intended to be done without public consultation. From the commentary I’ve seen from maxi taxis, those concerns are the evidence of the fact we need such consultations. This will ultimately provide very fair, careful structure.”

He said the Works Ministry has the lead on it and will be the entity which will take the matter to Cabinet.

Al-Rawi said “We’re in talks with Works currently, pulling together the necessary data and structures.”
“Obviously, the data is critical. We’ve made headway and will be operating on this in due course, but it’ll be premature to comment at this point.”

He noted that “the Works Ministry had won the President’s Award for the U-turn system and a multi-sector team involving people from the Judiciary, Licensing and Traffic had worked on this. Government will have the benefit of such a team on the PH sector issue.”

AL Rawi added: “All things being equal, I personally would want to bring this to the table as a matter of urgency. It ties in with the management of the roads and operationalisation of the radio frequency (RF) licence plates. Legislation for this has already been passed. We have the structures in place, a digitised Licensing Division, red light and spot speed cameras, and the demerit point system. All of this is rooted in amendments to the criminal justice sector.”

Oil from the FSO Nabarima now being transferred, 2 months after gov’t said it was 0

Russia banned by WADA from all major global sporting events 0