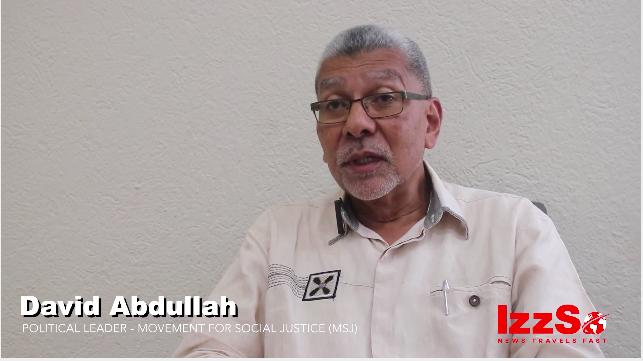 Leader of the Movement for Social Justice David Abdullah is seekg to set the record straight with regard to the renewal of the DESALCOTT contract under the People’s Partnership Government.

He says he had absolutely no involvement in that.

He is accusing the Minister of Public Utilities of seekig to evade the questions concerning WASA’s transformation.

The Minister questioned Abdullah’s moral authority to speak on WASA’s tranformation on Saturday.

He said that Abdullah was  part of the People’s Partnership Government that go a loan of three hundred and ninety four million dollars to retrench 1200 WASA employees.

Minister Gonzales asked whether Abdulah had questioed the contract between the People’s Partnership and DESALCOTT under what he referred to as ‘that corrupt Government’.

Abdullah maintains however that Minister Gonzales has failed to answer wha he calls false narratives by the Minister concerning managers who are expected to be retrenched.

He says the first such narrative was that only fifty percent of the two hundred and twenty six managers were to be sent home when in fact it was later revealed that wll would face dismissal.

The second narrative was that the monthly salaries of some managerial staff are between $20, 000 and $40, 000.

Abdullah also questioned the process for the hiring of external  consultats for the transformation a day after Cabinet approved the plan.

Kim calls it quits with Pete!!

Kim calls it quits with Pete!!

Kim calls it quits with Pete!! 0

Temporary Traffic Disruption -Arima Old Road, Arima On May 29th Between 7AM And 4PM 0

Lee says gov’t to blame for NGC’s billion-dollar loss, not the UNC 0

Ireland Takes In Over 36,000 Ukrainian Refugees 0