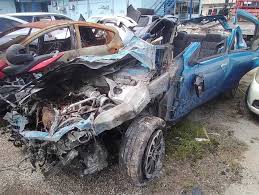 A teen and another man loose their lives in accident

Two people lost their lives following an accident along the Uriah Butler highway on Sunday morning.
Dead are thirty five year old Anthony Grant, of Pleasantville, and eighteen year old Branj Smith, of Lisas Gardens, Couva who attended the Carapichaima West Secondary School.
Police reports indicate that a blue Nissan Primera was travelling north when around 8.45 am the driver lost control of the car and it struck a concrete culvert on the southern end of a small bridge over a drain that connects Biljah Road to the northbound lane of the Uriah Butler highway.
The car then flipped several times before landing on its hood.
The driver of the car, a 21-year-old man from Couva, was taken to the EWMSC for treatment in a critical condition.
Relatives of Smith said he was going on a hike when disaster struck.

Tyler, The Creator Talks Liking Women & Having Sex With Men…Oops!!! 0