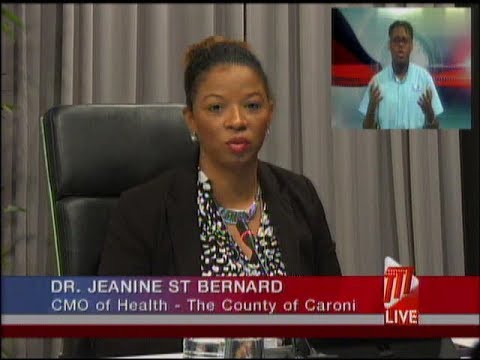 900 in quarantine as County Caroni surges in Covid cases

The County of Caroni now has 60 cases of Covid19, which led to 900 primary, secondary and tertiary contacts being quarantined.

This revelation was made on Saturday by County Medical Officer of Health for County Caroni Dr Jeanine St Bernard, during the Ministry of Health’s virtual media briefing.

Dr St Bernard said church services, bars, and the protective services have contributed to the surge in Covid19 cases in her county.

The doctor cited an incident, in which one person felt ill and went to a medical facility to be tested for Covid19, and then went to a church service outside of Caroni, generating 23 primary contacts, 46 secondary contacts and 41 tertiary contacts, leading to 15 more persons becoming infected in various counties including Caroni, St George East, and St George West.

She expressed concern about people gathering in the street outside of bars with some of them not wearing masks, while others gathered close together.

She said one case resulted in four positive primary contacts, and two positive secondary contacts, with all the people in some households being infected.

“And some of these contacts will not just be household persons but would be officers themselves. And these officers, of course, in having to quarantine these persons, we have not actively reduced our active police population because these officers will now have to be home in quarantine.”