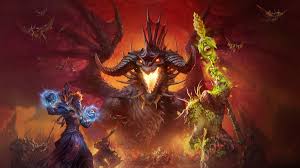 World of Warcraft has changed a lot in the last 15 years, and so have many of the game’s most popular characters. With every new expansion, developer Blizzard Entertainment has taken the game’s story in brand new directions, often introducing plot twists that have caused players to view some of their favorite characters in a whole new light. If you would have told any player back in 2004 that Bolvar Fordragon would one day replace Arthas Menethil as the Lich King, they would likely assume you had been reading some over-the-top fan fiction.

Green Jesus is back where he belongs, and Hallelujah for that. The OG Warchief of the Horde likely needs no introduction, but we’ll give him one anyway. Thrall is responsible for the founding of Durotar and Orgrimmar, the Horde’s capital city. In World of Warcraft Classic, Thrall can be found by his throne in the Valley of Wisdom within Orgrimmar, and is introduced to players early on in their leveling journey.

Classic not only restores certain characters to the beginning of their long-running plotlines, it brings some characters back from the dead. Cairne Bloodhoof was the original Chieftan of the Bloodhoof and the faction leader of the Tauren race. He ruled over the fields of Mulgore from his place of honor in Thunder Bluff.

Bolvar has arguably one of the most epic long-term stories in WoW history. Bolvar died heroically at the Wrathgate, only to be raised from the dead and tortured by Arthas. After Menthil’s fall, Bolvar heroically dons the Helm of Domination because “there must always be a Lich King.” Since then, he’s had continued dealings with players despite supposedly being frozen at the top of Icecrown Citadel, and there are players who feel that Bolvar might soon be making a major return to the game after Battle for Azeroth is concluded.

As far as raid bosses go, Lord Nefarius, aka Nefarian, has more personality than most. Players were first introduced to him while running the Upper Blackrock Spire dungeon, where he would urge his minions to kill the party’s healer: “Fools! Kill the one in the dress!”

Lord Victor would continue to interact with players during their run of the Blackwing Lair raid, culminating in a final fight where Lord Nefarius finally shows his true dragon form. “Let the games begin!”

Rivendare is arguably the most famous 5-man boss in Classic for a couple of different reasons. First, he drops the extremely rare item Deathcharger’s Reins which allows a player to summon his undead steed as a mount. Given that players have to compete with 9 others in their 10-man raid group on the off-chance that it actually dropped, the item has become one of the most coveted pieces of loot in the game.

This bronze dragon is the offspring of Nozdormu the Timeless One and is heavily involved in two major and iconic quest lines in Classic. Anachronos helps the player open the gates of Ahn’Qiraj by guiding them through a quest line that ends with the ringing of a gong. The first player to ring said gong is given the infamous Scarab Lord title and a special mount, an appropriate reward for one of the rarest and most legendary feats in Classic.